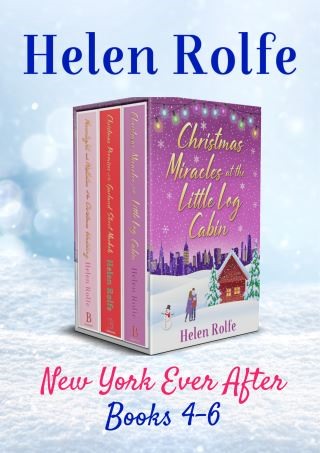 New York Ever After Books 4-6


This boxset contains the first 3 books in the New York Ever After series:
1. Christmas at the Little Knitting Box
2. Snowflakes and Mistletoe at the Inglenook Inn
3. Wedding Bells on Madison Avenue

Christmas at the Little Knitting Box

The Little Knitting Box has been in Cleo’s family for nearly four decades, and Cleo’s to manage for four years - ever since she arrived in New York, fresh off the plane from the Cotswolds. But instead of an early Christmas card in the mail this year, she gets a letter that tips her world on its axis. New York was supposed to be her second chance, do people get third chances?

Dylan has had a tumultuous few years. His marriage broke down, his mother passed away and he’s been trying to pick up the pieces as a stay-at-home dad. All he wants this Christmas is to give his kids the home and stability they need. But when he meets Cleo, he begins to see it’s not always so easy to move on, especially when his ex seems determined to win him back.

When the snow starts to fall, both Cleo and Dylan realise life is rarely black and white, and both have choices to make. Will Dylan follow his heart or his head? And will Cleo ever allow herself to be a part of another family when her own fell apart at the seams?

Snowflakes and Mistletoe at the Inglenook Inn

When Darcy returns to Manhattan, she’s put in charge of the Inglenook Inn, a cosy boutique hotel in the heart of Greenwich Village. The Inn needs a boost in bookings if it’s to survive, so Darcy is convinced that hosting Christmas this year is the answer. What she doesn’t expect is to meet a face from the past, which can only spell trouble.

Myles left England behind and took a job in New York. It’s a step forwards in his career, and has the added bonus of being nowhere near his family. He’s also hoping to avoid Christmas, the worst time of the year. But when his company puts him up at the Inglenook Inn and he recognises Darcy, it isn’t long before they clash.

As the flames on the log fire flicker and the snowflakes swirl above the New York streets, maybe this Christmas could be the one that changes everything...

When Myles and Darcy first met there were fireworks and ever since then it’s been a rollercoaster ride, sweeping them both off their feet.

Myles is determined to do things differently from his own parents, but he’s hard wired to give his career on Wall Street his all. Is he capable of taking his foot off the pedal?

Darcy has established herself as a fine hotelier, co-managing The Inglenook Inn in the heart of Greenwich Village. She strongly values her independence, but is it time she made room in her life for something else?

Fierce ambition drew Myles and Darcy together, yet could it be the thing that drives them apart? In the meantime, close friends Cleo and Dylan are having their own troubles.

Can either couple find their happy ever after despite busy lives, a crisis, and what looks like a wedding that’s never going to happen?

Helen Rolfe: Helen Rolfe is the author of many bestselling contemporary women's fiction titles, set in different locations from the Cotswolds to New York. Most recently published by Orion, she is bringing sixteen titles to Boldwood - a mixture of new series and well- established backlist. Her first new title will continue her Heritage Cove series and be published in May 2022. She lives in Hertfordshire with her husband and children.