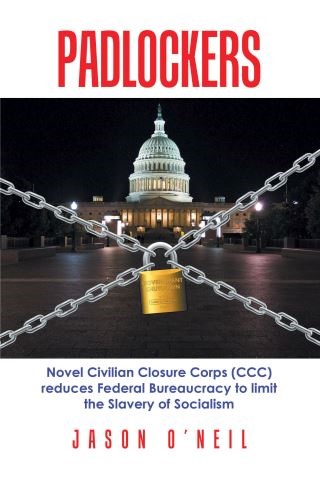 In this novel a young couple star in their roles to implement the Civilian Closure Corps (CCC), a unique project to dramatically downsize the federal bureaucracy in an effort to undue a micro-depression caused by the previous Socialist-Democrat administrations. Newly elected President Wicklow challenged the nation to close departments and provide pink slips to more than one-million federal employees appropriately described as disguised unemployment dependent upon national welfare services. The book details the steps necessary to shutter or dramatically reduce whole departments which either provide no value to the citizenry or provide services best accomplished by the states or private enterprise. In order to absorb many of the fired bureaucrats, long overdue Infrastructure Projects are started. The book highlights the creation of a bullet train between Washington and New York to end a national embarrassment while proving new technologies useful in modernization projects across the nation. Cole Langford, the “Cornfield Guy,” and Dawn Connelly lead project teams to implement the reductions so the President can keep his campaign promises. Both have automation expertise and high security clearances necessary to reduce the heretofore sacrosanct Intelligence Community. In the process, every other car in the parking lot disappears. In the end, the couple earns the Presidential Medal of Freedom, gets married and builds upon three years of closure experience to start a new company, Padlockers, Inc. It assists dozens of private companies which close due to the loss of federal contracts. The book ends with the couple enjoying their roles in draining the swamp and reducing the Deep State in Washington while starting a new entity which provides them, and thousands of others, a bright future in a flourishing, free-enterprise economy.

Jason O’Neil: JASON O’NEIL has published 21 books on subjects from the invention of an anti-gravity device, to new space-age vehicles to programs which reduce the federal budget. A former automation executive with insight into intelligence agencies, Mr. O’Neil creates programs to reduce the Slavery of Socialism while simultaneously countering the efforts by China to destroy America.