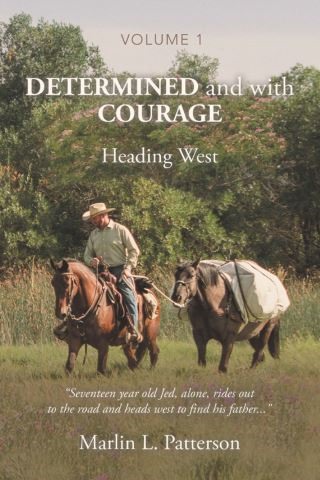 Determined and with Courage

It’s 1864 in central Illinois, and seventeen-year-old Jed is determined to go west to find his father, who left three years earlier in search of gold. Not knowing exactly where he is located, Jed feels his father should know of the passing of his wife, Jed’s mother. Having one clue in his hand—a letter from his father—he has an idea of where to start: Arizona.

As he travels westward, Jed finds additional clues of where his father might be from the people he meets along the way. Alone, he faces the early responsibilities of youth, the adventures of the outdoors, and building everything by hand. Having served a three-year apprenticeship as a carpenter and woodworker, Jed knows the work that is involved with building starting from scratch.

On his journey, Jed experiences the trials and adventures of pioneering in the mid-1800s, making new friends along the way. Travel with Jed as he rides, joins wagon trains, and serves those in need. As Jed faces challenges, he uses his determination and courage to overcome obstacles, all while hoping to find the father he lost and bring his family back together.

Marlin L. Patterson: Marlin L. Patterson was born during the Great Depression. He grew up on a farm, and in the winter, horses hitched to a bobsled were the family transportation. They were able to raise wheat for flour and had milk cows, pigs, and chickens. Although poor, they never went hungry. His mother’s grandfather and his step grandfather were both woodworkers, and Marlin followed in their footsteps.