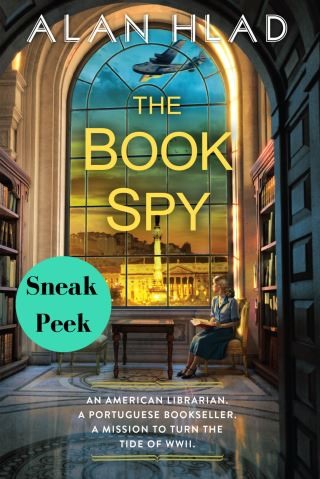 Be one of the first to read this sneak preview sample edition!

1942: With the war’s outcome hanging in the balance, every sliver of intelligence can be critical. Though far from the battlefields, cities like Lisbon, Portugal’s neutral capital, become lynchpins in a different kind of warfare, as President Roosevelt sends an unlikely new taskforce on a unique mission. They are librarians and microfilm specialists trained in espionage, working with a special branch of the Office of Strategic Services. By acquiring and scouring Axis newspapers, books, technical manuals, and periodicals, the librarians can gather information about troop location, weaponry, and military plans.

Maria Alves, a microfilm expert working at the New York Public Library, is dispatched to Lisbon, where she meticulously photographs publications and sends the film to London to be analyzed. Working in tandem with Tiago Soares, a brave and honorable bookstore owner on a precarious mission of his own—providing Jewish refugees with forged passports and visas—Maria acquires vital information, including a directory of arms factories in Germany.

But as she and Tiago grow closer, any future together is jeopardized when Maria’s superiors ask her to pose as a double agent, feeding misinformation to Lars Steiger, a wealthy Swiss banker and Nazi sympathizer who launders Hitler’s gold. Gaining Lars’ trust will bring Maria into the very heart of the Fuhrer’s inner circle. And it will provide her with a chance to help steer the course of war, if she is willing to take risks as great as the possible rewards . . .

Alan Hlad: Alan Hlad is a corporate executive turned writer. He is a member of the Historical Novel Society, Literary Cleveland, and the Akron Writers’ Group. Alan lives in Ohio with his wife and children. The Long Flight Home is his first novel. You can find him online at alanhlad.com, Facebook.com/AuthorAlanHlad and on Instagram @AlanHlad.