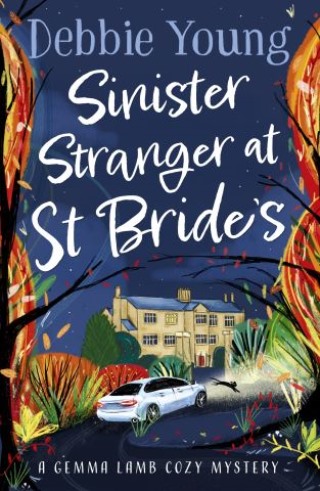 For anyone who loved St Trinian’s – old or new – or loves a cozy mystery on a grand estate filled with rather ‘interesting’ characters.

When an American stranger turns up claiming to be the rightful owner of the school’s magnificent country estate it could spell trouble for everyone at St Bride’s . . .

No one can believe it when the headmistress, Hairnet, instantly accepts the stranger’s claim, not:

Only fickle maths teacher Oriana Bliss isn’t suspicious of the stranger, after all she can just marry him and secure St Bride’s future forever. That's if inventive pranks by the girls - and the school cat - don't drive him away first.

Who will nab the stranger first? Oriana with the parson’s noose? Gemma with sinister secrets? Or could this be the end of St Bride’s?

Previously published by Debbie Young as Stranger at St Bride's.

Debbie Young: Debbie Young is the much-loved author of the Sophie Sayers and St Brides cosy crime mysteries. She lives in a Cotswold village, where she runs the local literary festival, and has worked at Westonbirt School, both of which provide inspiration for her writing. She is bringing both her series to Boldwood in a 13-book contract and they will be publishing several new titles in the series and republishing the backlist, starting in September 2022.