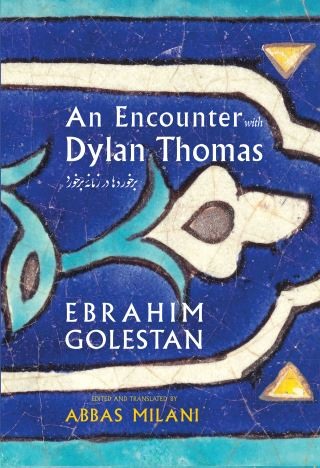 An Encounter with Dylan Thomas

Abadan, 1951. Iran and Britain are bracing for battle over the continued British monopoly of Iran's oil. Twenty-nine-year-old Ebrahim Golestan, who was to become a towering figure in Iranian cinema and literature, encounters Dylan Thomas, the famous Welsh poet, who died two years later at the age of thirty-nine from bronchial disease and pneumonia. More for his celebrity than an intimate knowledge of the subject, Thomas had been sent to Iran by the Anglo-Iranian Oil Company to write a script for a propaganda film about the company's supposedly salutary role in the country. But for a few hours, Golestan and Thomas pause amidst the escalating standoff between their two countries and speak candidly about poetry, history, philosophy, and the perils of translation. Published here for the first time is the English translation (with facing pages in the original Persian) of Golestan's unflinching portrayal of that encounter, revealing, all too clearly, how unsuited Thomas was for the task in hand.

Accompanying the translation is an account of Thomas's time in Iran, written by Abbas Milani, Director of the Iranian Studies Program at Stanford University, together with Alina Utrata, a Ph.D. candidate and Gates Cambridge scholar. Based on the poet's letters, journals, and archival material in England and Wales, it helps to shed further light on an episode long shrouded in mystery and plagued by controversy.

Publication of this book coincides with the hundredth birthday in October 2022 of Ebrahim Golestan. To mark the occasion, Professor Milani has included a personal and erudite introductory essay on Golestan's life and work, examining his pioneering approach to film and his important contribution to Iranian literature, despite living in exile for most of his adult life. With a filmography and selected bibliography of the works by or about Golestan, this multifaceted volume offers not only a striking commentary on Iranian arts, politics, and history, set against the tense backdrop of the impending geopolitical clash between Britain and Iran, but also a commemoration of the work of one of the most eminent and influential representatives of Iranian culture in modern times.