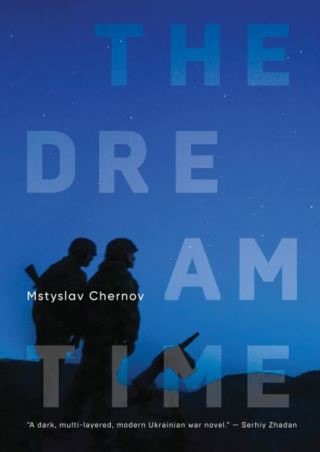 The Dreamtime is a fusion of documentary and psychological fiction inspired by the author’s experience as an international war correspondent.

"Scene by scene, Chernov vividly describes battles fought in the streets, the bombing and shelling of apartments, and the dreams of those on the front lines, physically and psychologically. … [T]his timely novel from a Ukrainian author excels at examining the connection between reality and dreams and exploring the effects of war on the human psyche.” ― Library Journal

“The Dreamtime is a dark, multi-layered, modern Ukrainian war novel. It demonstrates that war doesn't only occur on the front line, but that it quickly and relentlessly corrodes society, breaking down its structure. Chernov's dense, labored prose is tightly intertwined like blades of grass after a storm. But when engaged with, these interweaving shadows and voices gradually become clear and transparent to the reader.” ― Serhiy Zhadan, author of The Orphanage

Alluding to the Indigenous Australian concept of dreamtime, the novel offers a unique point of view on the beginning of the Russian invasion of Ukraine in 2014, through four intertwining narratives: a guilt-ridden doctor trying to exorcise his demons by exposing himself to war; a young woman tending to her ailing father as the bombs fall around them in Russian-occupied Slovyansk; a mysterious sociopath playing a cat-and-mouse game with an ex-lover; and a forensic expert solving a murder case while trying to save her marriage with a discharged soldier. As these threads unfurl, through harrowing scenes of personal and collective trauma, an enigmatic pattern emerges. The plots span in space from Ukraine's war-torn Donbas to southern Europe and southeast Asia, tied together by themes of existential conflict and the blurred line between reality and dreams.

The novel was first published in Kyiv in 2020 as the focal point for a video-art exhibition on the media’s role in creating public collective experiences. It was well received by critics and audiences and praised for its realism in depicting war, for its creative literary depiction of how dreams reflect the psyche, and for its masterly prose.

Mstyslav Chernov: Mstyslav Chernov is a Ukrainian war correspondent, filmmaker, photographer, and novelist known for his coverage of the Ukrainian revolution, the Russian invasion of Ukraine, the wars in Iraq, Syria, and Nagorno-Karabakh, and Taliban rule in Afghanistan after U.S. withdrawal, as well as for his art installations and exhibitions. Chernov is an Associated Press (AP) journalist and the President of the Ukrainian Association of Professional Photographers (UAPF). In addition to being nominated for the Livingston Award for his work on the civil unrest in Belarus in 2021 and Rory Peck Award for his coverage of the Battle of Mosul, he has won several prestigious awards, including two Royal Television Society Awards for his coverage of the downing of flight MH17, and the Georgy Gongadze Prize, the Knight International Journalism Award, and the DW Freedom of Speech Award for documenting the siege in Mariupol as one of the few remaining international journalists in that city, as captured in his AP article "20 Days in Mariupol: The Team that Documented the City’s Agony" (March 22, 2022, AP) as well as the AP and FRONTLINE documentary special "20 Days in Mariupol." He was named Ukrainian Photographer of the Year in 2013 and 2015. He was born in Eastern Ukraine and is typically based in Germany.