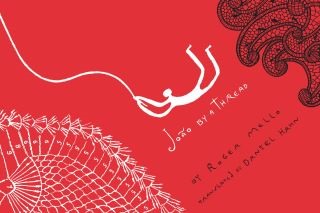 João by a Thread

An intricate and exquisite tale of how bedtime fears can be transformed into wondrous dreams and magical adventures, by Hans Christian Andersen award–winning Roger Mello

As João tucks under a lovingly woven quilt, he asks himself: So it’s just me now? He curls up, getting cozy in bed, and soon the world of his dreams unspools on the page. The blanket in his bed unravels into deep rivers, lakes, valleys, reservoirs, mountain ranges, fishing nets full of tadpoles and gaping holes, until what’s left is just one long thread. When he feels alone and scared in the dark, João “sews words like patchwork” into a new blanket to cover himself up. He weaves the threads of his quilt until they form one long sentence, and soon, the nighttime is peppered with his own silvery, slippery words. Roger Mello draws like a shapeshifter – to look at his illustrations is always to see something you missed before (a stingray, a crescent moon nestled into the palm of João’s hand). His breathtaking line drawings, beaming in white thread against deep red, combined with poetic and bewildered language, make João by a Thread a book to take into bed at the edge of sleep, just before you start to dream.

Roger Mello: About the author / illustrator: Roger Mello has illustrated over 100 titles – 22 of which he also wrote – and his unique style and adroit sense of color continues to push the boundaries of children’s book illustration. Rather than relying on written narrative to tell the story, Mello invites his young readers to fill the gaps with imagination. Mello has won numerous awards for writing and illustrating, including three of IBBY’s Luis Jardim Awards, the Best Children’s Book 2002 International Award, and the 2014 Hans Christian Andersen Award. In 2018, You Can’t Be Too Careful! was named a Batchelder Honor Book by the American Library Association. Charcoal Boys was published by Elsewhere Editions in 2019 and was named a USBBY 2020 Outstanding International Book.

About the translator: Daniel Hahn is the author of a number of works of nonfiction, including The Tower Menagerie. He is one of the editors of The Ultimate Book Guide, a series of reading guides for children and teenagers. His translation of The Book of Chameleons by José Eduardo Agualusa won the Independent Foreign Fiction Prize in 2007 and his translation of Agualusa’s A General Theory of Oblivion was shortlisted for the Man Booker International Prize in 2016 and in 2019, we published his translation of Agualusa’s The Society of Reluctant Dreamers. He has translated the work of Philippe Claudel, María Dueñas, José Saramago, Eduardo Halfon, and others. He has collaborated with Roger Mello on two powerfully poetic picture books: You Can’t Be Too Careful! and Charcoal Boys.