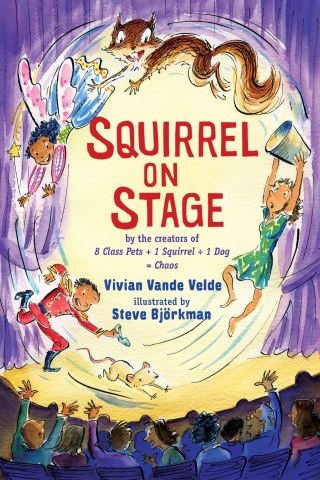 Twitch the lovably chaotic squirrel and Sweetie the Library Rat accidentally make their stage debuts in this hilarious chapter book, a new followup to 8 Class Pets.

When Twitch discovers the kids at school are putting on a Cinderella play, he can’t believe his luck. He loves good stories! But how to watch the play undetected? He convinces friend Sweetie the library rat to join his adventure to the auditorium, but of course it doesn’t go as planned! Twitch and Sweetie will go behind the curtain and even above stage before the day is over in this fourth book in the celebrated series.

With energetic illustrations accompanying the short, hilarious chapters, told from Twitch and Sweetie’s alternating points of view, Squirrel on Stage is a perfect pick for young readers just starting to seek out longer texts—or a great read-aloud. For aspiring thespians, Squirrel on Stage also includes tips kids can use to put on their own play.

Vivian Vande Velde: Vivian Vande Velde is the author of more than twenty books for children and young adults. She has received an Edgar Award, five of her novels have been named Best Books for Young Adults by the ALA, and 8 Class Pets + 1 Squirrel ÷ 1 Dog = Chaos was nominated for seven state awards. She lives in Rochester, New York.

Steve Björkman has illustrated many picture books, chapter books, and greeting cards. He illustrated both 8 Class Pets + 1 Squirrel ÷ 1 Dog = Chaos and Squirrel in the House, the two earlier books about Twitch. He lives in Irvine, California.