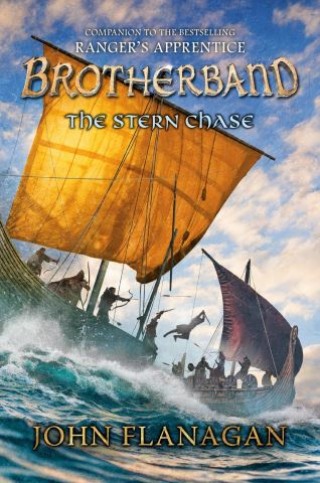 Follow the Brotherband in a battle against an Iberian pirate raiding ship in the latest exciting tale in the Brotherband Chronicles from John Flanagan, author of the internationally bestselling Ranger's Apprentice series!

The Herons are home in Skandia—preparing to celebrate two of their own and working on sea trials in the newly constructed Heron. But during a short excursion, they encounter an Iberian pirate ship raiding the coast of Sonderland, so Hal and his crew take action.

Though the Herons quickly triumph, the Iberians voice their fury at the Herons, vowing to take revenge. And soon they do—raiding the harbor and stealing or destroying as many ships as they can. Though there is little proof the Iberians are behind it, the Herons take their ship, the only one that has survived the raid—and race after their enemy in hot pursuit. They will take down these pirates and get justice—no matter what.

Climb aboard with the Herons in The Stern Chase, the exciting ninth installment of the Brotherband Chronicles!

John Flanagan: John Flanagan (www.WorldofJohnFlanagan.com) grew up in Sydney, Australia, hoping to be an author. And after a successful career in advertising and television, he began writing a series of short stories for his son, Michael, in order to encourage him to read. Those stories would eventually become The Ruins of Gorlan, Book 1 of the Ranger's Apprentice epic. Together with his companion series, the Brotherband Chronicles, the novels of John Flanagan have sold millions of copies and made readers of kids the world over. Mr. Flanagan lives in the suburb of Mosman, Australia, with his wife. In addition to their son, they have two grown daughters and four grandsons.