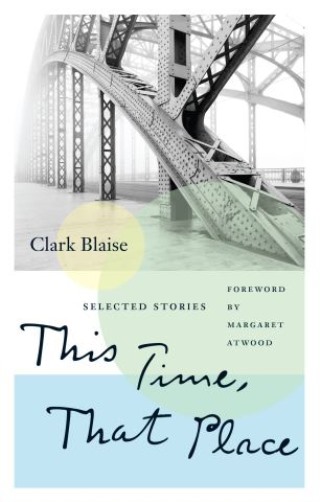 This Time, That Place

“Blaise is probably the greatest living Canadian writer most Canadians have never heard of.” —Quill & Quire

“If you want to understand something about what life was like in the restless, peripatetic, striving, anxiety-ridden, shimmer cultural soup of the late twentieth and early twenty-first centuries," writes Margaret Atwood, "read the stories of Clark Blaise." This Time, That Place draws together twenty-four stories that span the entirety of Blaise's career, including one never previously published. Moving swiftly across place and time, through and between languages—from Florida's Confederate swamps, to working-class Pittsburgh, to Montreal and abroad—they demonstrate Blaise's profound mastery of the short story and reveal the range of his lifelong preoccupation with identity as fallacy, fable, and dream.

This Time, That Place: Selected Stories confirms Clark Blaise as one of the best and most enduring masters of the form—on either side of our shared borders.

Clark Blaise: Clark Blaise (1940-), Canadian and American, is the author of 20 books of fiction and nonfiction. A longtime advocate for the literary arts in North America, Blaise has taught writing and literature at Emory, Skidmore, Columbia, NYU, Sir George Williams, UC-Berkeley, SUNY-Stony Brook, and the David Thompson University Centre. In 1968, he founded the postgraduate Creative Writing Program at Concordia University; he after went on to serve as the Director of the International Writing Program at Iowa (1990-1998), and as President of the Society for the Study of the Short Story (2002-present). Internationally recognized for his contributions to the field, Blaise has received an Arts and Letters Award for Literature from the American Academy (2003), and in 2010 was made an Officer of the Order of Canada. He lives in New York City.