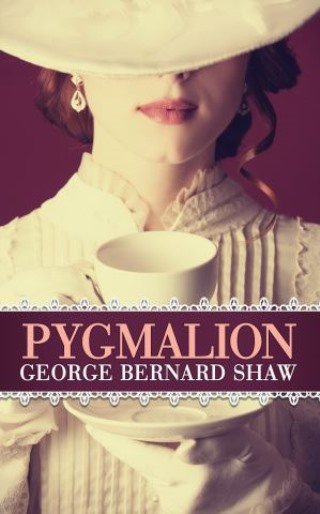 One of George Bernard Shaw’s best-known plays, Pygmalion is based on ancient Greek mythology. Pygmalion fell in love with one of his sculptures, which then came to life. The general idea of that myth was a popular subject for Victorian era British playwrights.

Shaw’s updated and revised version of this ancient Greek legend was first presented in England in 1914. Poking fun of the antiquated British class system, it introduces Henry Higgins, a professor of speech and phonetics who takes on a bet that he can transform a bedraggled, cockney flower seller, Eliza Doolittle, into a refined young lady simply by polishing her manners and changing the way she speaks. Their dynamic personalities clash, and the play follows their antics as Higgins imparts his knowledge to a stubborn Eliza, who’s happy to learn but reluctant to leave her old ways behind. In the process of convincing society that his creation is a mysterious royal figure, a duchess, Professor Higgins falls in love with his elegant handiwork.

Shaw’s clever adaptation was a rousing success. His irresistible theme together with brilliant dialogue made Pygmalion one of the most popular comedies in the English language. It was presented on the London and New York stages, and as an entertaining motion picture in is musical version, My Fair Lady. Shaw’s most well-known play, and the humorous and fascinating relationship dynamics at play, make it a timeless classic that will inspire generations to come.