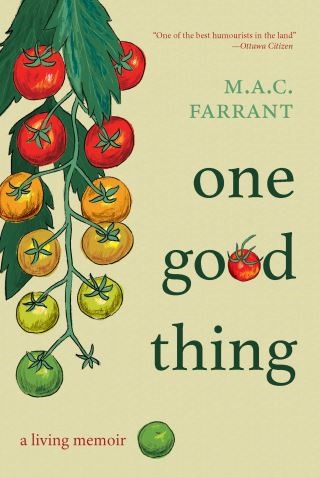 “One Good Thing” is a delightful hybrid of creative non-fiction and memoir. Written in sixty-four epistolary sections, it represents a search for hope and appeasement in a rapidly changing world. It is also a book of homage to gardening columnist extraordinaire Helen Chesnut of the Victoria Times Colonist, as each section focusses and expands on a particular gardening column of hers. Using a familiar “Dear Helen” structure, almost every piece in One Good Thing relates to the original gardening article that gave rise to it while, at times, ranging into a myriad of other topics, including the author’s practice of creating art, personal and familial details, and comic riffs on a number of close-to-the-heart themes. The book focusses on finding personal “calm abidance” through the practice of gardening as mediated by the universal and personal practice of writing.

M.A.C. Farrant: M.A.C. Farrant is the author of sixteen works of fiction, non-fiction, memoir, two plays, and over one hundred book reviews and essays. Her memoir, My Turquoise Years, which she adapted for the stage, premiered in 2013 at the Arts Club Theatre’s Granville Island Stage in Vancouver, British Columbia. Her novel, The Strange Truth about Us: A Novel of Absence, was chosen by the Globe and Mail as a Best Book of 2012. The World Afloat: Miniatures, a collection of very short fiction, and volume one in a trilogy of miniature fiction, was published by Talonbooks in the spring of 2014 and won the City of Victoria Book Butler Book Prize for that year. The Days: Forecasts, Warnings, Advice, volume two in the series, was published by Talon in the fall of 2016 and was a finalist for the City of Victoria Butler Book Prize for 2017 and the 2017 ReLit Award. The third collection in the series, The Great Happiness, appeared in the spring of 2019. Farrant’s work has been nominated for or won many awards, including the Commonwealth Writers Prize, the Ethel Wilson Fiction Prize, the Van City Book Prize, the National Magazine Awards, the ReLit Award, the Gemini Awards, the Victoria Book Prize (three times), and two Jessie Richardson Theatre Awards. She has taught writing at the University of Victoria, the Victoria School of Writing, and the Banff Centre for the Arts, and was writer-in-residence at Macquarie University, Sydney, Australia. “Farrant’s work is infused with iconoclastic innovation” (Globe and Mail). The Ottawa Citizen has called Farrant “one of the best humourists in the land.” BC Bookworld has called her “Canada’s most acerbic and intelligent humourist.” She has been described in print on numerous occasions as “the bizarro Alice Munro.”