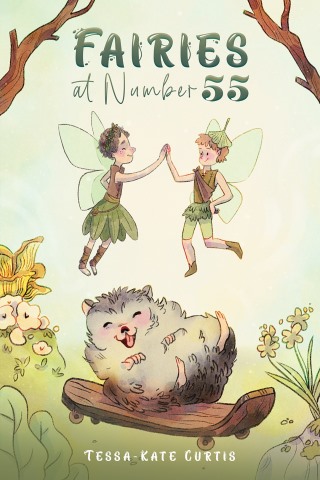 “Nobody in the world will admit to having seen a fairy, but it doesn’t mean they are not there.” “Fairies are kind and they always, always do the sweetest, gentlest things for you and for all that you love, but rarely will they be visible. But you just never know…” Fairy mum, Starlight, is beautiful. Sheer gossamer wings with a duck-egg blue hue, her tinkling voice always sounds like tiny cymbals chinking as she laughs, forever checking her fairy family, imploring them to keep kindness and gentleness to the fore of every endeavour. From their garden at number 55, the family of fairies, Starlight and Nimbus, their fairy children, Mimosa, Chicory and Chirrup, Lychen and Moss, weave in and out of the lives of various woodland and water creatures, “giants” and their pets, all along the leafy green and cool bridleway. Calling, along the way, upon such firm friends as doves, Darcy and Dill and magpies, Mick and Maggie, Spinner the friendly spider, and Skeet the generous dog, the fairies cheerfully carry out rescues, avert danger, make gifts, and even bring love to two lonely foxes.

Tessa-Kate Curtis: Tessa-Kate Curtis grew up in Hertfordshire, but now lives in Cambridgeshire with her husband Stuart, where she works full-time as a medical secretary. They live with their two dogs, Zeke and Nova, plus two large cats, Rocco and Tino – who think they are dogs. Tessa-Kate loves her weekends with Stu, particularly walking the dogs in woodlands or coastline, and exploring new trails. She enjoys swimming and cycling (occasionally), plus watching movies at the cinema – or at home. She is also really happy when burying her nose in an exceptionally good crime thriller novel.