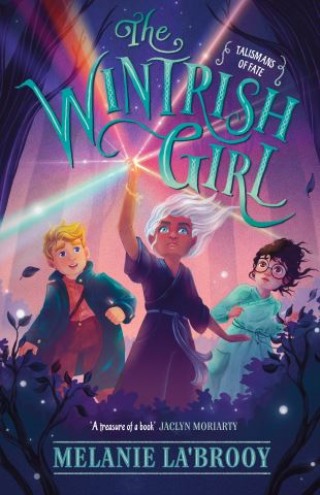 On Talisman Day in Arylia, every child receives an object that gives them special powers and reveals their destiny. Every child except for the Wintrish girl, Penn, that is. There' s no need for a Talisman to reveal her fate. Penn already knows that she' s doomed to a miserable, lonely life as a servant and outcast. All Penn has ever wanted is the impossible: to return to her home in Midwinter and find her true family. But she' s trapped in Arylia, where a long-forgotten evil is stirring ... When sinister events start to occur, the blame falls on the Wintrish girl. Suddenly Penn finds herself running for her life. Straight into deadly peril. Facing dangerous enemies with terrifying powers, what can an ordinary Wintrish girl do? Because without a Talisman, there' s no changing your fate ... is there? A wildly fun adventure featuring at least five impossibly daring escapes, important life lessons about friendship and cucumbers, a dragon with a fear of unicorns and some stylish execution wear. And one vicious berry.

Melanie La’Brooy: Melanie La' Brooy is an Australian author who has previously written five novels for adults, which were published in Australia and internationally. Over the past twelve years she has lived in Africa, Asia, Europe and the Middle East. Some of her favourite moments ever include boating down the Zambezi River past giraffes and hippos, seeing the Northern Lights from high up in the Arctic Circle, horse-riding through a snowy forest in Bulgaria and eating chocolate while watching movies with her family at home. The Wintrish Girl is her first novel for children.