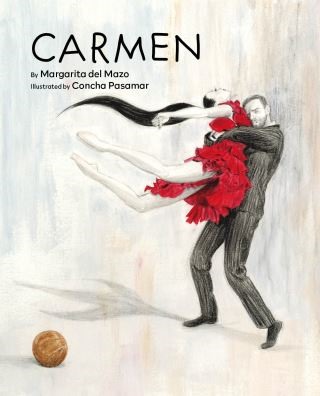 The Mérimée classic that Bizet brought to the opera is presented here in a new version, inspired by the choreography by Johan Inger for the Spanish National Dance Company. Discover the story of Carmen through the pure and crystal-clear eyes of a child.

I am nine years old. I love playing with my ball and my friend who is a corporal in the Alcalá Dragoon Regiment. My neighbor Carmen is the most beautiful woman I know. Everyone loves her, but she prefers to fly.

My neighbor Carmen works in the cigar factory outside my hometown. She is such a dazzling woman. When the siren sounds signal the end of the working day, the square gathers a huge crowd of admirers from all over. However, Carmen is a free spirit, and she always repeats the same motto: "Love is a rebellious bird that none can tame, and it is quite in vain that one calls it. If it suits it to refuse, nothing to be done, threat or plea.

An endearing story that will bring the little ones closer to the world of opera and dance and will invite readers to reflect on the true nature of love.

Margarita del Mazo is a Spanish storyteller and award-winning writer born in a small town in the province of Toledo. She studied Law, although her path was twisted into the wonderful world of stories and picture books. She currently teaches workshops on storytelling, creative writing, reading encouragement, theater for children, etc. She collaborates with institutions such as the Cervantes Institute, the Reina Sofía National Museum, the ABC Museum, the Thyssen Museum, the Community of Madrid, Castilla La Mancha, the Andalusian Center for Letters, the Casa del Lector (Matadero), town halls, hospitals, festivals (BITA, Etnosur, Hay Festival), storytelling marathons such as the one in Guadalajara, the Parla Cuenta Festival, as well as centers, schools, nursery schools, libraries, and other entities. Her first book was released in 2009 and since then she has published 23 books, some of which have been translated into up to twelve languages. Many of her books have received prestigious national and international awards.

Concha Pasamar is an award-winning Spanish illustrator. Words and drawings have always been part of her. For a few years, illustration has been added to her dedication to teaching and research of the Spanish language, which sometimes also takes her along the path of writing.