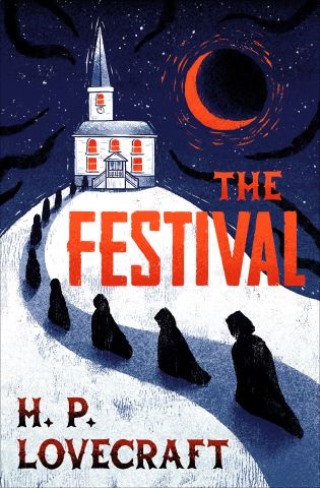 Christmas with the family takes a dark turn in this chilling short story by the acclaimed author of “The Call of Cthulhu”.

Beckoned by his family, a man travels to a snowy, seaside Massachusetts town to observe an ancient festival. His family has long celebrated it since the days when it was forbidden. But when he arrives, he notices something is off about this community . . . little details that just don’t add up.

What the man witnesses at his family’s house does little to comfort him. Soon he is drawn into a world unlike any he has known, and its sights will haunt him for the rest of his life . . .

H. P. Lovecraft: Howard Phillip Lovecraft (1890-1937) was born in New England, a landscape that he turned into a stage of fiction. His stories inherited the tradition of gothic horror tales from authors such as Edgar Allan Poe, but Lovecraft set his own standards. His first stories appeared in Weird Tales, a pulp magazine. “The Call of Cthulhu” (1926), a short story about a monstrous deity that inhabits the Earth, is the base of the myths related to the Cthulhu Mythos, a genre of horror fiction launched by Lovecraft. In its world, populated by beings of other dimensions, the laws of humanity are worthless. But man is incapable of understanding its insignificance in the face of the magnitude of the cosmos.