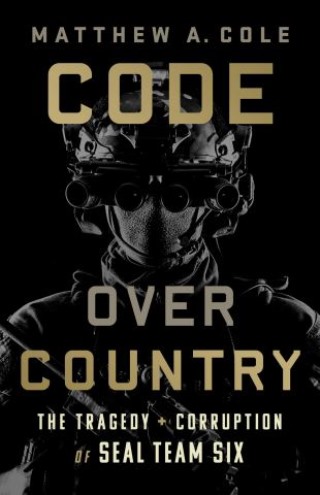 The Tragedy and Corruption of SEAL Team Six

A hard-hitting exposé of SEAL Team 6, the US military’s best-known brand, that reveals how the Navy SEALs were formed, then sacrificed, in service of American empire.

The Navy SEALs are, in the eyes of many Americans, the ultimate heroes. When they killed Osama Bin Laden in 2011, it was celebrated as a massive victory. Former SEALs rake in cash as leadership consultants for corporations, and young military-bound men dream of serving in their ranks.

But the SEALs have lost their bearings. Investigative journalist Matthew Cole tells the story of the most lauded unit, SEAL Team 6, revealing a troubling pattern of war crimes and the deep moral rot beneath authorized narratives. From their origins in World War II, the SEALs have trained to be specialized killers with short missions. As the wars in Iraq and Afghanistan became the endless War on Terror, their violence spiraled out of control.

Code Over Country details the high-level decisions that unleashed the SEALs’ carnage and the coverups that prevented their crimes from coming to light. It is a necessary and rigorous investigation of the unchecked power of the military—and the harms enacted by and upon soldiers in America’s name.

Matthew Cole:
Matthew A. Cole is an investigative journalist at The Intercept. He has covered national security since 2005, reporting extensively on the CIA's post-9/11 transformation, on the conflicts in Afghanistan and Pakistan, and on the U.S.'s intelligence operations. He was previously an investigative producer for ABC and NBC News, and has written for GQ, Salon, Details, ESPN, and New York. He has won a Deadline Club Award and has received two Emmy nominations for his reporting. A graduate of Columbia's Graduate School of Journalism, Cole lives in Brooklyn with his family.