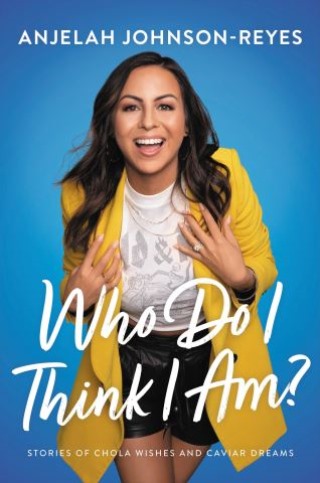 Who Do I Think I Am?

This hilarious and thoughtful memoir from comedy legend Anjelah Johnson-Reyes explores questions of identity, belonging, and her two dreams as a kid: to be an actress and to be a chola.

You may know Anjelah Johnson-Reyes for her viral sketch "Nail Salon" (over 100 million views globally) or her beloved MadTV character Bon Qui Qui, but it's her clean humor and hilarious storytelling that make her one of the most successful stand-up comedians and actresses today.

With her razor-sharp wit, Anjelah recounts funny stories from her journey—from growing up caught between two worlds (do chips and salsa go with potato salad?) to unexpectedly embracing faith (“I love Jesus, but I will punch a ‘ho”) to her many adventures in dating (she may or may not have accepted dates simply for the food). Through it all, Anjelah transforms from a suburban-adjacent kid with Aquanet-drenched hair into a devoted Christian who abstains from drinking and premarital sex, into a mall-famous Oakland Raiders cheerleader, and then an actually famous comedian traveling the world and meeting people from all-walks of life, including Oprah. No biggie. (Huge biggie.) As she travels the world, Anjelah has eye-opening experiences, and she morphs from square, rigid Anjelah into “Funjelah,” and learns that she can still ride with Jesus without squashing the other parts of her personality.

Anjelah's stories explore subjects such as navigating your racial identity, finding your place in the world, chasing your crazy dreams, embracing the messiness of an evolving faith, and searching for belonging and meaning. Through her journey, Anjelah gets closer to discovering her true identity and encourages readers to have the audacity to dream big.

Anjelah Johnson-Reyes: Anjelah Johnson-Reyes is currently one of the most successful stand-up comics touring today, selling out theaters and clubs across the country. Well, not today, because global pandemic, but today-adjacent. Maxim Magazine hailed the comedian and actress as “uproariously funny” (weird they didn’t write “unapologetically sexy,” but okay), and Time Out Chicago described her shows as “filled with almost non-stop laughter.”

Anjelah, born and raised in San Jose and of Mexican and Native American descent, has guest starred on shows such as Superstore, The Shield, Ugly Betty, Curb Your Enthusiasm, and About a Boy. She has also appeared in such films as Enough Said, Our Family Wedding, and Alvin And The Chipmunks: The Squeakquel, as well as voicing a role in The Book of Life. After a stint as a professional cheerleader for the Oakland Raiders, Anjelah became an Internet sensation with her viral video, “Nail Salon.” That same year she joined the cast of MADtv as a series regular, which spawned another Internet sensation, “Bon Qui Qui.” This original character, a disgruntled fast food employee with no filter, has been viewed by over 85 million people worldwide. Anjelah also released a full album as Bon Qui Qui on the Warner Music label and performed multiple sold out tours. In June 2009, Anjelah recorded her first one-hour special for Comedy Central and Warner Bros. Records titled “That’s How We Do It.” Her second one-hour special “The Homecoming Show” aired on NUVOtv in July of 2013 and is currently available on Netflix. In 2014, Anjelah recorded her third hour special “Not Fancy,” which is a Netflix original, and is currently available for streaming. In 2017 she filmed her fourth hour-long special “Mahalo & Goodnight” in Honolulu, Hawaii. It premiered on the Epix channel and is now available for streaming on Hulu.