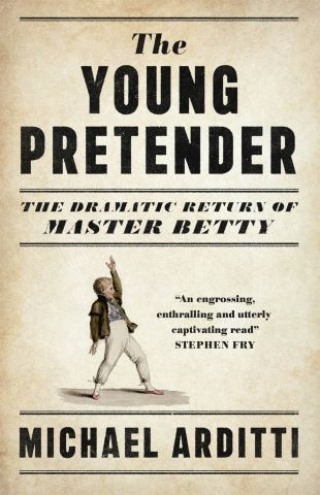 "The Young Pretender is an absolute joy - charming and funny, with the lightest hint of melancholy, and a wonderfully imaginative recreation of the Georgian theatre scene" KATE SAUNDERS

"I loved how Arditti conjures...the smell of the theatre and the ghosts of these bygone players that haunt the stage...and the wonderful period details. Arditti wears his research so lightly" LARUSHKA IVAN-ZADEH, reviewing on Radio 4's FRONT ROW *****

Mobbed by the masses, lionised by the aristocracy, courted by royalty and lusted after by patrons of both sexes, the child actor William Henry West Betty was one of the most famous people in Georgian Britain.

At the age of thirteen, he played leading roles, including Romeo, Macbeth and Richard III, in theatres across the country. Prime Minister William Pitt adjourned the House of Commons so that its members could attend his debut as Hamlet at Covent Garden. Then, as rivals turned on him and scandal engulfed him, he suffered a fall as merciless as his rise had been meteoric.

"Arditti's voice as Betty is impeccable. He is touchy, sometimes myopic, sincere in his ambitions. His attempts to reclaim lost glory are run through with an affecting melancholy" The Times

The Young Pretender takes place during Betty's attempted comeback at the age of twenty-one. As he seeks to relaunch his career, he is forced to confront the painful truths behind his boyhood triumphs. Michael Arditti's revelatory new novel puts this long forgotten figure back in the limelight. In addition to its rich and poignant portrait of Betty himself, it offers an engrossing insight into both the theatre and society of the age. The nature of celebrity, the power of publicity and the cult of youth are laid bare in a story that is more pertinent now than ever.

"Michael Arditti tells a story of a Regency child star with great panache and compassion, bringing a forgotten celebrity back to life for the modern age. A compelling read I was sad to finish." LINDA GRANT

"Michael Arditti is a writer who takes risks. His material is always compelling and provocative, his techniques sophisticated and oblique" PATRICIA DUNCKER, Independent on Sunday