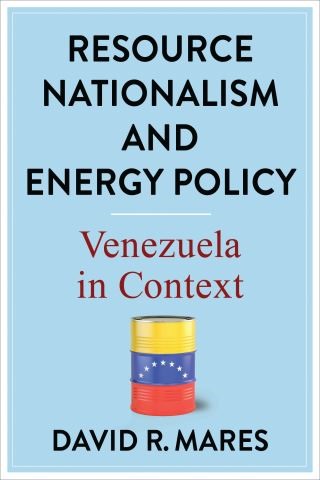 It is widely thought that state ownership of natural resources, oil and natural gas in particular, causes countries to fall under the sway of the “resource curse.” In such cases, governments allegedly display “resource nationalism,” which destabilizes the economy, society, and politics. In this book, David R. Mares dispels these beliefs and develops a powerful new account of the relationship between state resource ownership and energy policy.

Mares examines variations in energy policy across a wide range of countries, underscoring the fact that in most of the world outside the United States, subsoil natural resources are owned by the state. He considers the history of Latin American oil and gas policies and provides an in-depth analysis of Venezuela from 1989 to 2016—before, during, and after the presidency of Hugo Chávez. Mares demonstrates that the key factors that influence energy policy are the inclusiveness of the political system, the level of competitiveness within policy making, and the characteristics of individual leaders. Domestic politics, not state ownership, determines the effectiveness and efficiency of energy policies: the “resource curse” is avoidable. Drawing on these findings, Mares reconceptualizes resource nationalism, arguing that government intervention into resource extraction is legitimate as long as the benefits are shared through the provision of public goods. Featuring a sophisticated grasp of both Latin American politics and energy policy, this book sheds new light on why some governments are responsible stewards of natural resources while others appropriate national wealth for partisan or private benefit.

David R. Mares: David R. Mares is distinguished professor of political science, Institute of the Americas Endowed Chair for Inter-American Affairs, and director emeritus of the Center for Iberian and Latin American Studies at the University of California, San Diego. He is also nonresident scholar for Latin American energy studies at the Baker Institute for Public Policy at Rice University and a member of the Council on Foreign Relations.