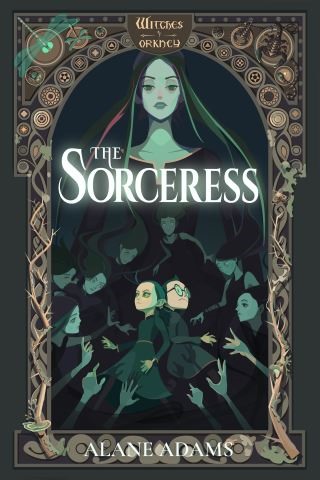 As Abigail embarks on her third year at the Tarkana Academy, the coven is under a dark cloud: their coven leader, Madame Hestera, has fallen under a deadly curse and Anarae, a powerful High Witch, has taken over the coven. Worse, Abigail fears that Abignus, the malignant presence that once took possession of her, has moved on to Calla.
While Hugo and Abigail seek answers, a surprising ally appears in Endera, Abigail’s long-time nemesis. Endera has sworn to help bring Hestera back, and now she must rely on Abigail to protect her from witchlings who want revenge and from the dark forces working to tear the coven apart. As clues surface that Anarae may not be a Tarkana witch at all but a powerful sorceress from a far-off realm, Hugo faces dire circumstances when he faces Anarae on his own. Meanwhile Abigail and Endera become stuck in the Netherworld, where they encounter nightmarish beings. Will Abigail and her companions stave off disaster one more time? Or does this spell the end of Orkney forever? Join Hugo and Abigail in their final adventure in the stunning conclusion to the Witches of Orkney series.

Alane Adams: Alane Adams is an author, professor, and literacy advocate. She is the author of the Legends of Orkney™ and Legends of Olympus fantasy mythology series for tweens and The Coal Thief, The Egg Thief, The Santa Thief, and The Circus Thief, picture books for early-grade readers. She lives in Southern California.