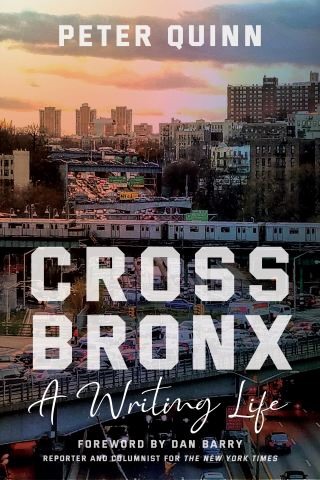 In his inimitable prose, master storyteller Peter Quinn chronicles his odyssey from the Irish Catholic precincts of the Bronx to the arena of big-league politics and corporate hardball.

Cross Bronx is Peter Quinn’s one-of-a-kind account of his adventures as ad man, archivist, teacher, Wall Street messenger, court officer, political speechwriter, corporate scribe, and award-winning novelist. Like Pete Hamill, Quinn is a New Yorker through and through. His evolution from a childhood in a now-vanished Bronx, to his exploits in the halls of Albany and swish corporate offices, to then walking away from it all, is evocative and entertaining and enlightening from first page to last. Cross Bronx is bursting with witty, captivating stories.

Quinn is best known for his novels (all recently reissued by Fordham University Press under its New York ReLit imprint), most notably his American Book Award–winning novel Banished Children of Eve. Colum McCann has summed up Quinn’s trilogy of historical detective novels as “generous and agile and profound.” Quinn has now seized the time and inspiration afforded by “the strange interlude of the pandemic” to give his up-close-and-personal accounts of working as a speechwriter in political backrooms and corporate boardrooms:

“In a moment of upended expectations and fear-prone uncertainty, the tolling of John Donne’s bells becomes perhaps not as faint as it once seemed. Before judgment is pronounced and sentence carried out, I want my chance to speak from the dock. Let no man write my epitaph. In the end, this is the best I could do.” (from the Prologue)

From 1979 to 1985 Quinn worked as chief speechwriter for New York Governors Hugh Carey and Mario Cuomo, helping craft Cuomo’s landmark speech at the 1984 Democratic Convention and his address on religion and politics at Notre Dame University. Quinn then joined Time Inc. as chief speechwriter and retired as corporate editorial director for Time Warner at the end of 2007. As eyewitness and participant, he survived elections, mega-mergers, and urban ruin. In Cross Bronx he provides his insider’s view of high-powered politics and high-stakes corporate intrigue.

Incapable of writing a dull sentence, the award-winning author grabs our attention and keeps us enthralled from start to finish. Never have his skills as a storyteller been on better display than in this revealing, gripping memoir.

Peter Quinn: Peter Quinn is a novelist, political historian, and foremost chronicler of New York City. He is the author of Banished Children of Eve, American Book Award winner; Looking for Jimmy: In Search of Irish America; and a trilogy of historical detective novels—Hour of the Cat, The Man Who Never Returned, and Dry Bones.