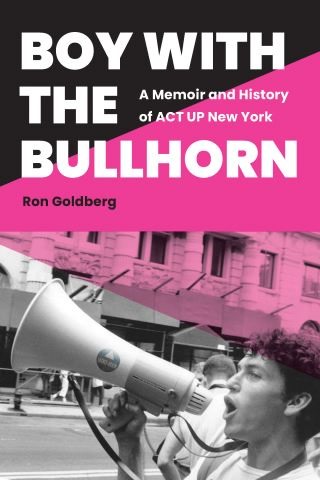 Boy with the Bullhorn

A Memoir and History of ACT UP New York

A coming-of-age memoir of life on the front lines of the AIDS crisis with ACT UP New York.

From the moment Ron Goldberg stumbled into his first ACT UP meeting in June 1987, the AIDS activist organization became his life. For the next eight years, he chaired committees, planned protests, led teach-ins, and facilitated their Monday night meetings. He cruised and celebrated at ACT UP parties, attended far too many AIDS memorials, and participated in more than a hundred zaps and demonstrations, becoming the group’s unofficial “Chant Queen,” writing and leading chants for many of their major actions. Boy with the Bullhorn is both a memoir and an immersive history of the original New York chapter of ACT UP, the AIDS Coalition to Unleash Power, from 1987 to 1995, told with great humor, heart, and insight.

Using the author’s own story, “the activist education of a well-intentioned, if somewhat naïve nice gay Jewish theater queen,” Boy with the Bullhorn intertwines Goldberg’s experiences with the larger chronological history of ACT UP, the grassroots AIDS activist organization that confronted politicians, scientists, drug companies, religious leaders, the media, and an often uncaring public to successfully change the course of the AIDS epidemic.

Diligently sourced and researched, Boy with the Bullhorn provides both an intimate look into how activist strategies are developed and deployed and a snapshot of life in New York City during the darkest days of the AIDS epidemic. On the occasions where Goldberg writes outside his personal experience, he relies on his extensive archive of original ACT UP documents, news articles, and other published material, as well as activist videos and oral histories, to help flesh out actions, events, and the background stories of key activists. Writing with great candor, Goldberg examines the group’s triumphs and failures, as well as the pressures and bad behaviors that eventually tore ACT UP apart.

A story of ordinary people doing extraordinary things, from engaging in outrageous, media-savvy demonstrations, to navigating the intricacies of drug research and the byzantine bureaucracies of the FDA, NIH, and CDC, Boy with the Bullhorn captures the passion, smarts, and evanescent spirit of ACT UP—the anger, grief, and desperation, but also the joy, camaraderie, and sexy, campy playfulness—and the exhilarating adrenaline rush of activism.

Ron Goldberg: Ron Goldberg is a writer and activist. His articles have appeared in OutWeek and POZ magazines, Central Park, and The Visual AIDS Blog. He served as a research associate for filmmaker and journalist David France on his award-winning book How to Survive a Plague and enjoys speaking at high schools and colleges about the history of AIDS and the lessons and legacy of ACT UP.