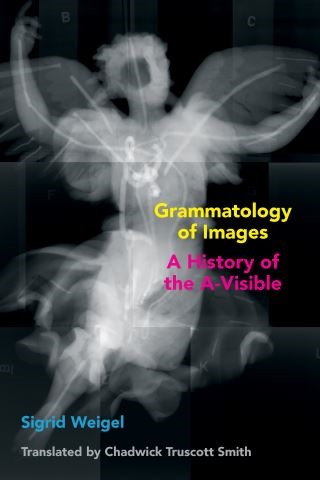 A History of the A-Visible

Grammatology of Images radically alters how we approach images. Instead of asking for the history, power, or essence of images, Sigrid Weigel addresses imaging as such. The book considers how something a-visible gets transformed into an image. Weigel scrutinizes the moment of mis-en-apparition, of making an appearance, and the process of concealment that accompanies any imaging.

Weigel reinterprets Derrida’s and Freud’s concept of the trace as that which must be thought before something exists. In doing so, she illuminates the threshold between traces and iconic images, between something immaterial and its pictorial representation. Chapters alternate between general accounts of the line, the index, the effigy, and the cult-image, and case studies from the history of science, art, politics, and religion, involving faces as indicators of emotion, caricatures as effigies of defamation, and angels as embodiments of transcendental ideas.

Weigel’s approach to images illuminates fascinating, unexpected correspondences between premodern and contemporary image-practices, between the history of religion and the modern sciences, and between things that are and are not understood as art.

Sigrid Weigel: Sigrid Weigel is former director of Zentrum für Literatur-und Kulturforschung in Berlin and has taught at numerous universities in the United States and elsewhere around the world. She has published on literature, philosophy, cultural history, image theory, memory, secularization, genealogy, and the cultural history of sciences across numerous books in German and English, including Walter Benjamin: Images, the Creaturely, and the Holy (Stanford, 2013).