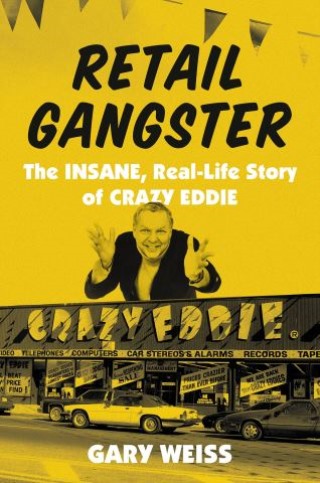 A biography of the spectacular rise and fall of Eddie Antar, better known as "Crazy Eddie," whose home electronics empire changed the world even as it turned out to be one of the biggest business scams of all time

Back in the fall of 2016 we heard the news about the passing of Eddie Antar, "Crazy Eddie" as he was known to millions of people, the man behind the successful chain of electronic stores and one of the most iconic ad campaigns in history. Few things evoke the New York of a particular era the way "Crazy Eddie! His prices are insaaaaane!" does. The journalist Herb Greenberg called his death the "end of an era" and that couldn't be more true. What's insane is that his story has never been told.

Before Enron, before Madoff, before The Wolf of Wall Street, Eddie Antar's corruption was second to none. The difference was that it was a street franchise, a local place that was in the blood stream of everyone's daily life in the 1970s and early '80s. And Eddie pulled it off with a certain style, an in your face blue collar chutzpah. Despite the fact that then U.S. Attorney Michael Chertoffcalled him "the Darth Vader of capitalism" after the extent of the fraud was revealed, one of the largest SEC frauds in American history after Crazy Eddie's stores went public in 1984, Eddie was talked about fondly by the people who worked for him. They still do--there are myriads of ex-Crazy Eddie employee web pages that still attract fans, and the Crazy Eddie fraud scheme is now taught in every business school across the United States.

Many years have passed since the franchise went down in spectacular fashion but Crazy Eddie's moment has endured the way that iconic brands and characters do--one only need Google the media outpouring that accompanied his death. Maybe it's because it crystallized everything about 1970s New York almost perfectly, the merchandise and rise of consumer electronics (stereos!), the ads (cheesy!), the money (cash!). In Retail Gangster, investigative journalist Gary Weiss takes readers behind the scenes of one of the most unbelievable business scam stories of all time, a story spanning continents and generations, reaffirming the old adage that the truth is often stranger than fiction.

Gary Weiss: Gary Weiss has been an investigative journalist and author on fraud and corporate corruption for over 25 years. His pieces have been considered essential reading ever since he exposed the Mafia's infiltration of Wall Street in 1996. ​Born and raised in the Bronx, Gary lives with his wife in New York City.