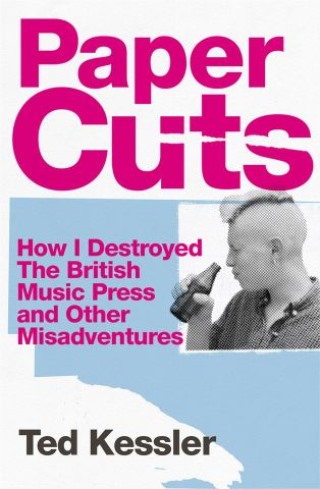 How I Destroyed the British Music Press and Other Misadventures

PAPER CUTS is the inside story of the slow death of the British music press. But it's also a love letter to it, the tale of how music magazines saved one man's life. Ted Kessler left home and school around his seventeenth birthday, determined 'to be someone who listened to music professionally'. That dream appeared forlorn when he was later arrested for theft behind the counter of the record shop he managed during acid house's long hot summer of love. Paper Cuts tells how Kessler found redemption through music and writing and takes us on a journey alongside the stars he interviewed and the work-place dramas he navigated as a senior staffer at NME through the boom-time '90s and on to the monthly Q in 2004, where he worked for sixteen years before it folded with him at its helm as editor in 2020.

We travel in time alongside musical heroes Paul Weller, Kevin Rowland, Mark E Smith, and to Cuba twice, first with Shaun Ryder and Bez, then with Manic Street Preachers. We spend long, mad nights out with Oasis and The Strokes, quality time with Jeff Buckley and Florence Welch, and watch Radiohead deliver cold revenge upon Kessler in public. A story about love and death, about what it's like when a music writer shacks up with a conflict of interest, and what happens when your younger brother starts appearing on the cover of the magazines you work for, this is the memoir of "a delinquent doofus" whose life was both rescued and defined by music magazines.

Ted Kessler: Ted Kessler was on the staff at NME as a writer and editor between 1993 and 2003, before joining Q magazine's staff, working there for 16 years. He was Q's editor for four years, until it closed in 2020. He also devised and edited the acclaimed MY OLD MAN: TALES OF OUR FATHERS, published in 2016 by Canongate.