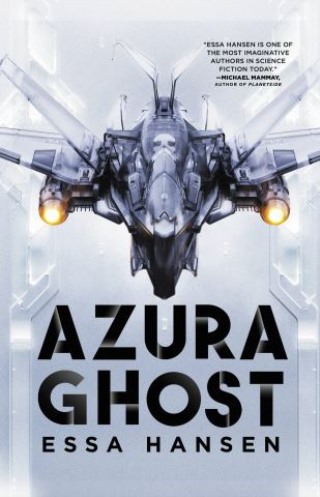 One man and his sentient starship are all that stands between the multiverse and its total destruction in the second book of Essa Hansen’s brilliant, mind-bending space opera trilogy perfect for fans of The Expanse and A Long Way to a Small Angry Planet.

Caiden has been on the run for ten years in order to keep his Graven ship out of the hands of his old adversary, Threi. But when a childhood friend he once thought dead reappears to take it, he is lured into a game of hunter and hunted with the one person whose powers rival Threi’s; his sister, Abriss.

Now to have a fighting chance against the most influential siblings in the multiverse, Caiden is left with no choice. He must unlock the Azura's true potential—which means finally confronting his own mysterious genetic origins.

"A blistering crash through bubble universes, seas of the luminous dead, and sleeping alien cities. Liquid-crystal star ships, living machines, reality-cleaving swordplay, and a dynasty whose words command your synapses and cells. Heart-heavy, astonishingly inventive, with language that burns like plasma. A biomechanical sucker punch of a book. The space opera you've been waiting for."--Micah Dean Hicks, author of Break the Bodies, Haunt the Bones

"Essa Hansen is one of the most imaginative authors in science fiction today, and in AZURA GHOST she delivers a thrill ride of a story."--Michale Mammay, author of Planetside

"Azura Ghost is a magnificent achievement. Hansen juggles multiple universes as if they were fireballs, without ever dropping a single one. Like the best of science fiction, Azura Ghost asks the questions that we often fear to ask ourselves: about the extent of our responsibility in this world, what it means to choose, the limits of empathy, and the inevitability of loss; and like the best of science fiction, it asks them both at the scale of the cosmos, and at the level of a single human heart. The novel's ambition is upheld by soaring prose, which does full justice to the scope of Hansen's imagination. An instant classic." -- Gautam Bhatia, co-ordinating editor of Strange Horizons and author of The Wall and The Horizon

Essa Hansen: Essa Hansen is an author, swordswoman, and falconer. She is a sound designer for science fiction and fantasy films at Skywalker Sound, with credits in movies such as Dr. Strange and Avengers: Endgame.