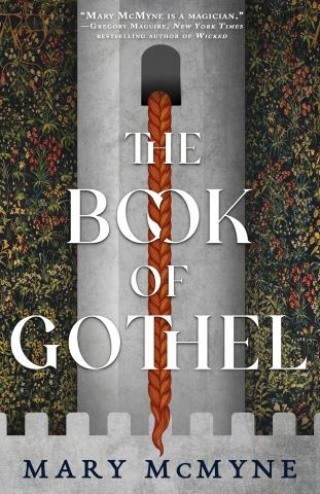 The Book of Gothel

Everyone knows the story of Rapunzel in her tower, but do you know the story of the witch who put her there? Mary McMyne’s spellbinding debut reveals the truth behind the fairy tale—the truth they never wanted you to know, as only a witch might tell it.

"Smart, swift, sure-footed and fleet-winged, The Book of Gothel launches its magic from a most reliable source: the troubled heart. Mary McMyne is a magician."—Gregory Maguire, NYT bestselling author of Wicked

Germany, 1156. With her strange black eyes and even stranger fainting spells, young Haelewise has never quite fit in. Shunned by her village, her only solace lies in the stories her mother tells of child-stealing witches, of princes in wolf-skins, and of an ancient tower cloaked in mist, where women will find shelter if they are brave enough to seek it.

When her mother dies, Haelewise is left unmoored. With nothing left for her in her village, she sets out to find the legendary tower her mother spoke of—a place called Gothel, where she meets a wise woman willing to take Haelewise under her wing. There, she discovers that magic is found not only in the realm of fairy tales.

But Haelewise is not the only woman to seek refuge at Gothel. It’s also a haven for a girl named Rika, who carries with her a secret the church strives to keep hidden. A secret that reveals a dark world of ancient spells and murderous nobles, behind the world Haelewise has always known.

Told from the witch's own perspective, The Book of Gothel is a lush, historical retelling filled with dark magic, crumbling towers, mysterious woods, and evil princes. This is the truth no one ever wanted you to know, as only a witch might tell it.