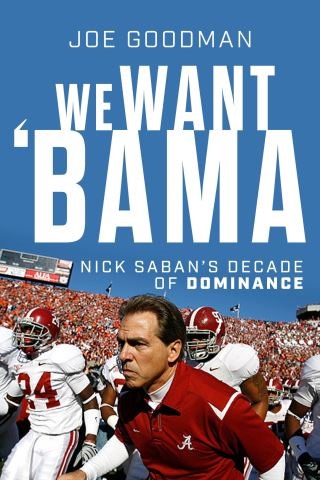 Nick Saban and the Crimson Tide's Decade of Dominance

A lively, sometimes shocking chronicle of the Nick Saban era at Alabama -- the most vaunted program in college football.

Joseph Goodman was an industrial painter, like his father, before pursuing a career in journalism. To break into the business while in school with a young family, he commuted from Birmingham daily to work at small-town Alabama newspapers. After stints at the Jasper Daily Mountain Eagle, Cullman Times and North Jefferson News, Joseph was awarded a fellowship at the New York Times. He respectfully declined to cover high school football for the Miami Herald. Joseph then covered the Florida Gators and the Miami Heat as a beat writer for the Herald. He returned home to Alabama in 2015 to work for the Birmingham News, his hometown newspaper. He is now the sports columnist for the Birmingham News, Mobile Press-Register, Huntsville Times and AL.com. Joseph was born in Mobile and raised by Irondale. His lifelong best friend is Kevin “Skinny Bandit, aka El Flaco, aka Bryant Get Me Something Cold to Drink” Jackson. Joseph is married to Sarah Goodman, who encouraged him to write from the beginning. They have known the love of three children. This is Joseph’s first book. It was written in the Jesuit tradition.