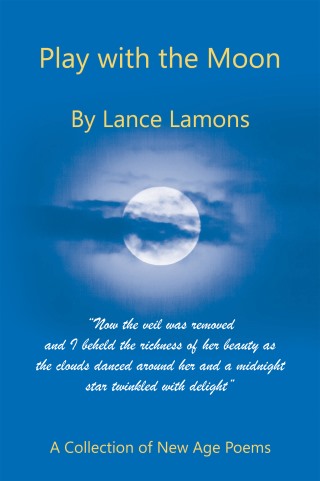 Play with the Moon

A Collection of New Age Poems

"I love clouds that I can almost touch." This sums up something so grand, something so above us and yet so near we can have the experience now if somehow, we can awaken to it. Weaved in and out of these lines there is a view from up there, an attitude from up there that conveys the aliveness of all things in nature. Nature, and truly all things, are waiting to be companions and friends. Smiles are the most magical of all things. There is wisdom carried with them when they are sincere. But how do you really convey some idea like that? It is a mystery. My greatest hope is that this book leaves you with a smile that knows God's blessings in all things. I never wrote these poems of myself but rather they are expressions I received during long periods of quiet. Then I wrote down what I could convey to share with you. There is much hidden, awaiting your surprise. It certainly was a gift given, to which I abound with abundant gratitude.

Lance Lamons: Coming from a small town in southern California he went through high school, the Military and then opened a business that collapsed due to unseen circumstances. After that he made his way into the Corporate Management world and then lived in Hawaii for many years. It was a very normal life with family and friends but along the way something very unusual happened, he met a modern-day mystic that changed his life forever. Poetry and literature seemed to be the last thing that would manifest yet something from within started edging its way to the surface. One day while living in the mountains he was driving in the snow and was stopped by a herd of elk crossing the road that went on and on and on, seemly to never stop. Where did they all come from, he wondered? It seemed to be an endless flow of life. From that point poems and literature began to pour forth and after thirty years of writing it came time share them with the world. When you dip into the cosmos time disappears. Lance is a premonition poet that wrote poems about people and events that were revealed years after the poems were written. His poems reveal everything in life unfolding as it should in its own time. Some poems included both his wife and his father’s passing. Distracted from poetry by the responsibility of the corporate world many of his early poems sat on the shelf collecting dust. After reuniting with his high school sweetheart, she discovered the shelfed poems and blew off the dust and brought to life poetry for Lance again. They sat down and he reread his works and was inspired to begin writing again. All this time I thought Lance was a salt and pepper, left brain executive yet what a beautiful surprise to find an artist and poet.