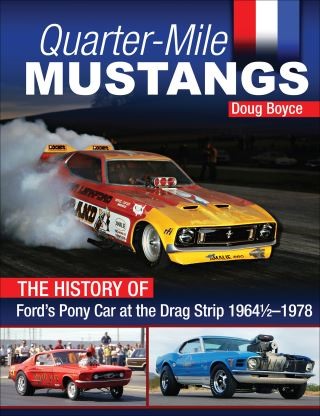 Blast down the quarter mile in the first two generations of Ford’s legendary pony car across all drag racing classes in Quarter-Mile Mustangs!

Since first becoming a mass-market success in mid-1964, the Ford Mustang has made millions of passes down the quarter mile on sanctioned drag strips. With styling flared toward the youth, aftermarket parts manufacturers saw an enormous opportunity to produce go-fast components to aid in propelling Ford’s pony car down the 1320. The success of these cars was immediate.

In the hands of successful and seasoned pros, such as Gas Ronda, Bill Lawton, and Dick Brannan, Ford unleashed the devastatingly potent 1965 A/FX Mustang fastback, which was built by Blue Oval stalwarts Holman & Moody with the 427 SOHC (Cammer) engine that unleashed havoc on mother Mopar.

From those very first factory drag cars through the fabled 1968-1/2 Cobra Jets, drag racing historian Doug Boyce highlights the many successes of pioneers, such as “Dyno” Don Nicholson, Les Ritchey, Phil Bonner, Hubert Platt, and Al Joniec. However, it’s not just all doorslammers. As A/FX transitioned into Funny Car, a whole new chapter in Mustang drag racing was written with Mickey Thompson taking the reins and steering Mustangs to success throughout the late 1960s and early 1970s.

The muscle car-era Mustangs joined the Mustang II and soldiered on the best they could as ever-changing rules hampered Ford’s new pony body, with drivers Bob Glidden and Nicholson trying to squeeze every bit of performance out of the diminutive pony.

Quarter-Mile Mustangs: The History of Ford’s Pony Car at the Drag Strip 1964-1/2-1978 brings forth the most in-depth coverage of these cars at the drag strip. Don’t get caught sleeping at the light!

Doug Boyce: Doug Boyce has had a life-long addiction to drag racing. He turned his first wrench at age 8 and attended his first race at age 10. The essence of burning rubber and screaming open pipes filled his head and by his early teens, he was elbow deep in building classic cars. He continued to fuel the fire while working 9 to 5 in the automotive field. Doug has filled what little spare time he has had writing numerous club and magazine articles related to drag racing's golden years. He has an ongoing love of drag racing and the way it used to be.  He is the author of <i>Grumpy's Toys, Junior Stock</i>, <i>Drag Racing’s Quarter-Mile Warriors: Then & Now, 1001 Drag Racing Facts</i>, <i>Match Race Mayhem</i>, and <i>Dyno Don: The Cars and Career of Dyno Don Nicholson</i> all best-selling CarTech titles.