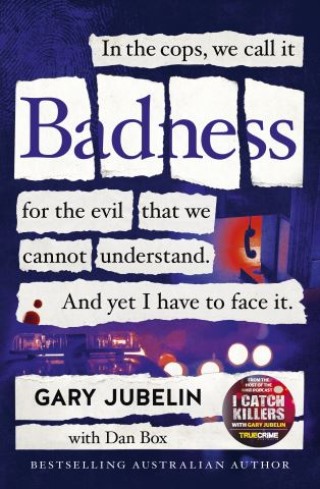 The sequel to the #1 Bestseller I Catch Killers

As a cop, I used to sit on one side of the interview room table facing murderers, child abductors and rapists. Now I'm sitting on the other side: disgraced, forced out of the police and judged to be a criminal. I want to show you what the world looks like from here.

Talking to crooks, cops, forensic psychologists, scientists and victims, I've gone back to some of Australia's worst acts of badness, including unsolved murders that never made the front pages as well as infamous killings carried out by Ivan Milat and the Granny Killer, the murder of Anita Cobby, the Hoddle Street massacre, Port Arthur, horrific abuse at the Parramatta girls' home and the disappearance of preschooler William Tyrrell.

What I've found has made me question everything, including where evil comes from, what drives us to commit crimes and how we can prevent them. I used to think I was on the side of the angels. Now I am not so sure.

Gary Jubelin was one of Australia's most celebrated Homicide detectives, leading investigations into the William Tyrrell case, the serial killing of three Aboriginal children in Bowraville and the brutal gangland murder of Terry Falconer. In 2020, he was found guilty of illicitly recording conversations with a witness. Since leaving the NSW Police Force, he has built a career in the media, working in newspapers, television and podcasts. Gary still works hard to help the victims of crime.

GARY JUBELIN was Australia's most celebrated homicide detective, leading investigations into the disappearance of William Tyrrell, the serial killing of three Aboriginal children in Bowraville and the murderer Jeffrey Hillsley, who once described himself as 'Walking Evil'. During his 34- year career, Jubelin also ran the crime scene following the Lindt Cafe siege, investigated the death of Caroline Byrne and recovered the body of Matthew Leveson. He retired as a Detective Chief Inspector of the New South Wales Police.