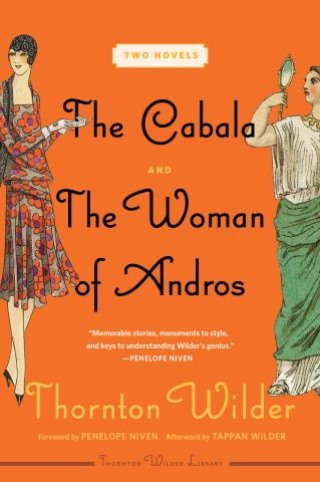 The Cabala and The Woman of Andros

“For much of the twentieth century, these remarkable early novels were hidden in the great shadow of The Bridge of San Luis Rey. Now we can examine them in the spotlight for the gifts that they are—memorable monuments to style and keys to understanding Wilder’s genius.” – Penelope Niven, Thornton Wilder Biographer

Featuring a foreword by Penelope Niven and a revealing afterword by Wilder’s nephew, Tappan, this reissue reintroduces the reader to the Thornton Wilder’s first novel, The Cabala, and to The Woman of Andros, one of the inspirations for his Pulitzer Prize-winning play Our Town.

A young American student spends a year in the exotic world of post-World War I Rome. While there, he experiences firsthand the waning days of a secret community (a "cabala") of decaying royalty, a great cardinal of the Roman Church, and an assortment of memorable American ex-pats. The Cabala, a semiautobiographical novel of unforgettable characters and human passions, launched Wilder's career as a celebrated storyteller and dramatist.

The Woman of Andros, set on the obscure Greek island of Brynos before the birth of Christ, explores universal questions of what is precious about life and how we live, love, and die. Eight years later, Wilder would pose the same questions on the stage in a play titled Our Town, also set in an obscure location, this time a village in New Hampshire. The Woman of Andros is celebrated for some of the most beautiful writing in American literature.

Thornton Wilder (1897-1975) was an accomplished novelist and playwright whose works, exploring the connection between the commonplace and cosmic dimensions of human experience, continue to be read and produced around the world. His Bridge of San Luis Rey, one of seven novels, won the Pulitzer Prize in 1928, as did two of his four full-length dramas, Our Town (1938) and The Skin of Our Teeth (1943). Wilder's The Matchmaker was adapted as the musical Hello, Dolly!. He also enjoyed enormous success with many other forms of the written and spoken word, among them teaching, acting, the opera, and films. (His screenplay for Hitchcock's Shadow of Doubt [1943] remains a classic psycho-thriller to this day.) Wilder's many honors include the Gold Medal for Fiction from the American Academy of Arts and Letters, the Presidential Medal of Freedom, and the National Book Committee's Medal for Literature.