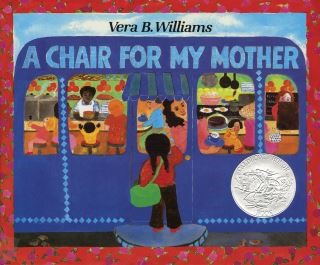 A Chair for My Mother

This classic and heartwarming picture book was written and illustrated by the celebrated Vera B. Williams and was named a Caldecott Honor Book by the American Library Association.

"A tender knockout. It's rare to find much vitality, spontaneity, and depth of feeling in such a simple, young book."—Kirkus Reviews

Vera Williams tells of a young girl who, along with her waitress mother, saves coins in a big jar in hopes that they can someday buy a new chair for their apartment, the kind of chair her mother deserves after being on her feet all day in the Blue Tile Diner. Into the jar also goes the money Grandma saves whenever she gets a bargain at the market.

There hasn't been a comfortable place to sit in the apartment since a fire in their previous apartment burned everything to "charcoal and ashes." Friends and neighbors brought furniture to their new apartment downstairs, but no one brought anything big or soft or comfortable. Finally the jar is full, the coins are rolled, and in the book's crowning moment, mother, daughter, and Grandma search four different furniture stores, and after carefully trying several chairs, like Goldilocks, they find the chair they've been dreaming of at last.

Vera Williams enhances this story about family, community, and the power of working together toward a common goal with her signature folk art-inspired paintings.

A Chair for My Mother has sold more than a million copies and is an ideal choice for reading and sharing at home and in the classroom. "A superbly conceived picture book expressing the joyful spirit of a loving family."—The Horn Book

Vera B. Williams began her career in children’s books by illustrating Hooray for Me!, written by Remy Charlip with Lilian Moore. Her beloved A Chair for My Mother won multiple awards, including a Caldecott Honor, and “More, More, More,” Said the Baby also received a Caldecott Honor. Vera B. Williams was the recipient of the Jane Addams Children’s Book Award; she was awarded the 2009 NSK Neustadt Prize for Children’s Literature; and she was the US nominee for the Hans Christian Andersen Award in 2004. Vera B. Williams died on October 16, 2015, shortly before this book was completed.