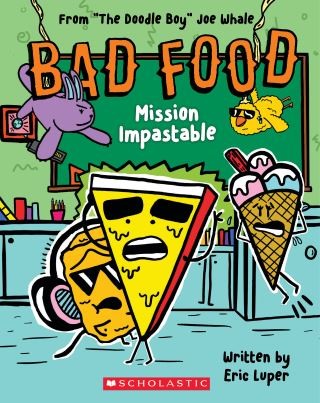 All of your favorite characters from Belching Walrus Elementary return in the third Bad Food book by "the Doodle Boy" Joe Whale and fan-favorite Eric Luper!It’s the start of another school year at Belching Walrus Elementary! Slice, Totz and Scoop are looking forward to finally just chilling with their foodie friends in the cafeteria. A new batch of kids means a chance at a fresh start, right? It’s only the second day of school and already there are whispers about scurrying footsteps in the dark halls and squeaky classrooms. The other foods are totally spooked! Before long, our favorite trio discover that this year Belching Walrus Elementary has welcomed class pets. What are they up to and why is food suddenly going missing? It’s a mystery for the ages in the next Bad Food adventure!

Eric Luper:
Eric Luper has written books for kids of all ages, including the YA novel Seth Baumgartner's Love Manifesto. He loves excitement and is always looking for his next adventure. Eric has fibbed his way into a tour of the ultra-secret PEZ headquarters, rebuilt a castle in France, explored the tunnels under Paris and Istanbul, escaped hungry crocodiles in Costa Rica, and rafted down the Colorado River. He lives with his family in Albany, New York.
Joe Whale AKA the Doodle Boy is a ten-year-old boy from the UK whose artwork went viral after he was commissioned by a local restaurant to decorate an eight-foot wall. Since then, he has been interviewed by the Insider and appeared on Ellen Degeneres’s Little Big Shots (hosted by Melissa McCarthy). He has also been sought after by corporate offices, hotels, and restaurants to fill their walls with his illustrations.