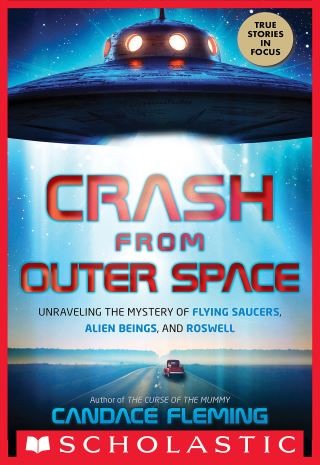 Award-winning author Candace Fleming sets her gaze on the mystery at Roswell, New Mexico, and the "crash from outer space" that set the United States on edge for decades.

In 1947, during the early years of the Cold War, a field in Roswell, New Mexico was disturbed by a strange crash and smattering of debris. Some say the bodies of extraterrestrial beings were strewn across the ground, that a UFO had crashed there, and that the government was covering up the evidence in a massive conspiracy.

But what really happened at Roswell?

The infamous "crash from outer space" has become a fixture in our culture, inspiring a surge of UFO sightings and conspiracy theories. But at its heart is the story of military scientists, a city on the brink of the Cold War, and a debris field scattered with mystery. What was it that actually crashed at Roswell? Were alien bodies found? Was it Russian spies? Secret military technology? And did the government try to hide what they found?

An electrifying exploration of one of the most thrilling mysteries in recent history, by Sibert Award winning author Candace Fleming.

Candace Fleming:
Candace Fleming is the versatile and acclaimed author of more than twenty books for children and young adults, including The Curse of the Mummy: Uncovering Tutankhamun’s Tomb; The Rise and Fall of Charles Lindbergh, winner of the YALSA Excellence in Nonfiction for Young Adults Award; the Sibert Award winner Honeybee: The Busy Life of Apis Mellifera; the Los Angeles Times Book Prize winner and Sibert Honor Book The Family Romanov: Murder, Rebellion, and the Fall of the Russian Empire; and the critically acclaimed Amelia Lost: The Life and Disappearance of Amelia Earhart.