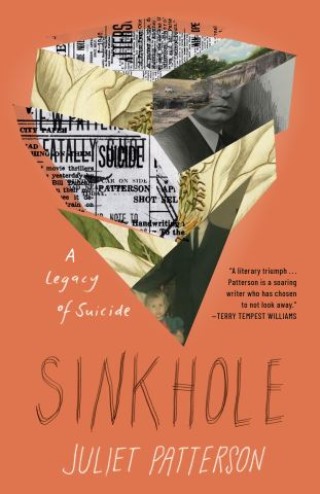 A Legacy of Suicide

A sublimely elegant, fractured reckoning with the legacy and inheritance of suicide in one American family.

In 2009, Juliet Patterson was recovering from a serious car accident when she learned her father had died by suicide. His death was part of a disturbing pattern in her family. Her father’s father had taken his own life; so had her mother’s. Over the weeks and months that followed, grieving and in physical pain, Patterson kept returning to one question: Why? Why had her family lost so many men, so many fathers, and what lay beneath the silence that had taken hold?

In three graceful movements, Patterson explores these questions. In the winter of her father’s death, she struggles to make sense of the loss—sifting through the few belongings he left behind, looking to signs and symbols for meaning. As the spring thaw comes, she and her mother depart Minnesota for her father’s burial in her parents’ hometown of Pittsburg, Kansas. A once-prosperous town of promise and of violence, against people and the land, Pittsburg is now literally undermined by abandoned claims and sinkholes. There, Patterson carefully gathers evidence and radically imagines the final days of the grandfathers—one a fiery pro-labor politician, the other a melancholy businessman—she never knew. And finally, she returns to her father: to the haunting subjects of goodbyes, of loss, and of how to break the cycle.

Juliet Patterson is the author of Sinkhole, as well as two collections of poems, Threnody and The Truant Lover, a finalist for the Lambda Award. Her poems and essays have appeared widely. She has received fellowships from the Jerome Foundation, the Minnesota State Arts Board, and the Minneapolis-based Institute for Community Cultural Development. Her other awards include the Arts & Letters Susan Atefat Prize in nonfiction and the Lynda Hull Memorial Poetry Prize. She lives in Minneapolis.