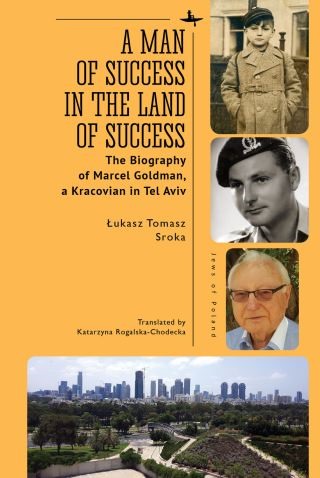 The Biography of Marcel Goldman, a Kracovian in Tel Aviv

This book tells the story of Holocaust survivor and prominent banker Marcel Goldman, born in Krakow in 1926. Goldman started his studies in economics in Krakow and completed them in Israel, where he became a respected banker. In telling his story, this book analyzes Israel’s social and economic development, its causes and circumstances. Following Goldman as our main character, we take a close look at the birth of the private banking sector and the building of modern economy in Israel. The book also describes the life of Polish Jews in Israel in general, the way in which they settled there, and built the prosperity of the state. The story of Marcel Goldman is an example of how Israel’s success is the sum of its citizens’ successes.

Łukasz Tomasz Sroka: Łukasz Tomasz Sroka (born 1979), professor of humanities in the field of history, infobroker, since 2019 chairman of the History Discipline Council of the Pedagogical University in Krakow, head of the Department of the 19th Century History of that University, chairman of the Committee for the Preservation of Monuments of Jewish Culture of the Society of History and Lovers Krakow Sights. He conducts research on the history and culture of Jews in the 19th and 20th centuries, Polish-Jewish relations, the history of contemporary Israel, Polish-Israeli relations and the history of Galicia (especially Lviv and Krakow). Creator or co-creator of several international exhibitions on Jewish topics. His achievements include over 100 scientific papers published in various countries of the world, he is the author of the monograph entitled In the Light of Vienna. Jews in Lviv - between Tradition and Modernization (1867-1914), (2019) and co-editor of the study volume Polish-Israeli Cooperation Experience, from Zionism to Israel (2017).