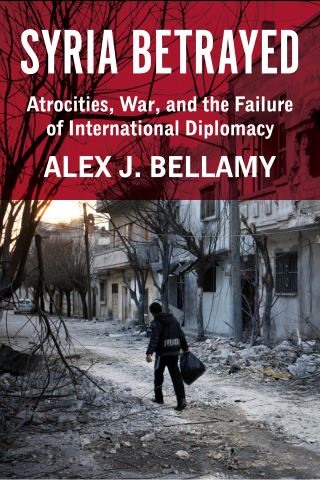 Atrocities, War, and the Failure of International Diplomacy

The suffering of Syrian civilians, caught between the government’s barrel bombs and chemical weapons and religious fanatics’ beheadings and mass killings, shocked the world. Yet despite international law and political commitments proclaiming a responsibility to protect civilians from mass atrocities, world actors stood aside as Syria burned. Again and again, neighboring states, global powers, and the United Nations opted for half-measures or made counterproductive choices that caused even more harm.

Alex J. Bellamy provides a forensic account of the world’s failure to protect Syrian civilians from mass atrocities. Drawing on interviews with key players, documents from the United Nations and other international organizations, and sources from the Middle East and beyond, he traces the missteps of the international response to Syria’s civil war. Bellamy systematically examines the various peace processes and the reasons they failed, highlighting potential alternative paths. He details how and why key actors prioritized their own national interest, geopolitical standing, regional stability, local rivalries, counterterrorism goals, or domestic politics rather than the welfare of Syrians. Some governments settled on unrealistic strategies founded on misguided assumptions while others pursued naked ambition; the United Nations descended into irrelevance and even complicity. Shedding new light on the decisions that led to a vast calamity, Syria Betrayed also draws out lessons for more effective responses to future civil conflicts.

Alex J. Bellamy: Alex J. Bellamy is professor of peace and conflict studies and director of the Asia Pacific Centre for the Responsibility to Protect at the University of Queensland, Australia. He is the author of World Peace (And How We Can Achieve It) (2019) and coauthor of Responsibility to Protect: Promise to Practice (2018), among other books.