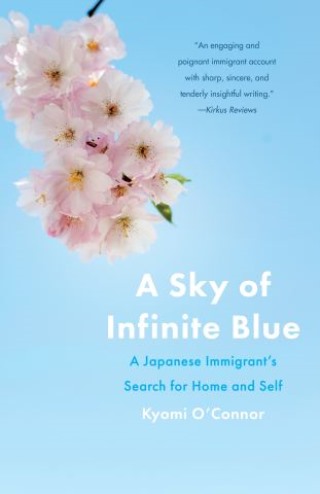 A Sky of Infinite Blue

A Japanese Immigrant's Search for Home and Self

From an early age, Kyomi’s life was filled with emotional difficulties—an adulterous father, an overreliant mother, and a dismissive extended family. In an effort to escape the darkness of her existence in Japan, Kyomi moved to the States in February 1990 to start a new life as a researcher working at NIH in Bethesda, MD. Soon, she fell in love with her husband-to-be: Patrick, a warm, charismatic British cancer researcher whose unconditional love and support helped her begin to heal the traumas of her past. Eventually, their journey together led them to change their careers and move to San Diego, CA, where they dedicated themselves to a Buddhism practice that changed both their lives—aiding them in their spiritual growth and in realizing their desire to help others.
Then Patrick was diagnosed with stage IV metastatic melanoma in the brain—and, after a fierce, three-year-long battle against his cancer, died on July 4, 2016. Devastated, Kyomi spent a year lost in grief. But when she one day began to write, she discovered that doing so allowed her to uncover truths about herself, her life history, and her relationship with Patrick. In the process, she surfaced many old, unhealed wounds—but ultimately writing became her daily spiritual practice, and many truths emerged out of the darkness. After many years of struggle and searching, Kyomi finally found the love and light that had existed within her all along.

Kyomi O'Connor: Kyomi O’Connor moved to the States from Japan in February 1990 to work as a post-doctoral researcher at the NIH in Bethesda, Maryland. Soon, she fell in love with her husband-to-be, Patrick. Their journey together led them to change their careers, move to San Diego, and practice Buddhism. They grew spiritually together, and became leaders in their Buddhist community and inseparable partners through the many hardships they faced together. Patrick fell ill in the summer of 2013 with the diagnosis of stage IV metastatic melanoma in the brain, and passed away three years later on July 4, 2016. After his death, writing helped Kyomi rediscover light in her life. These days, she spends her time writing (she’s an active writer online at Medium), practicing yoga and Qi Gong, cooking, traveling, and taking photographs. Kyomi lives in San Diego with her two cats, Tommy and Omi.