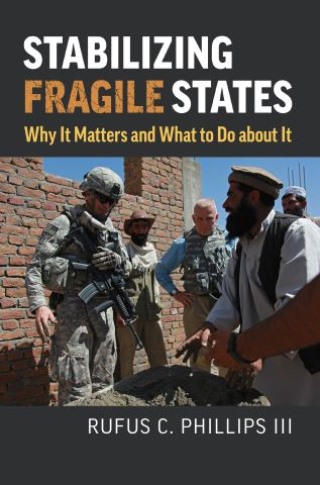 Why It Matters and What to Do about It

Stabilizing Fragile States: Why It Matters and What to Do About It is a masterclass on intervening to help fragile states stabilize in the face of internal challenges that threaten national security and how the United States can do better at less cost with improved chances of success. Written from the point of view of an on-the-ground practitioner after exceptional government and voluntary service abroad, Rufus C. Phillips III uses his experience to explain why US efforts to help fragile countries stabilize is important to national security.

Helping stabilize fragile states has been too much of a poorly informed, impersonal, technocratic, and conflicted process that has been dominated by reactions to events and missing a more human approach tailored to various countries’ circumstances. In his book, Phillips explains why we have not been more successful and what it would take to make our stabilization efforts effective, sustainable, and less expensive.

Recent US involvements have ranged in intensity and size from Colombia, which did not put US boots on the ground, to massive interventions in Iraq and Afghanistan, which did. The lack of success in Afghanistan and Iraq has tended to dominate the national conversation about dealing with fragile states. Stabilizing Fragile States provides a thorough analysis of what has gone wrong and what has gone right in US involvement.

• Stabilizing fragile states is more of an unconventional political and psychological endeavor requiring an operational mindset rather than conventional war or normal diplomacy.
• Defines the focus of counterinsurgency not as killing insurgents but as a positive effort to win local people's support by involving them in their own self-defense and political, social, and economic development.
• Americans must understand the religious, historical, political, and social context of the host country and be consistent, patient, and persistent in what they do.
• Security-force training in host countries must include respect for civilians and the definition by their leadership of a national cause that the trainees believe is worth risking their lives to defend.
• Recommends creating a dedicated cadre of expeditionary diplomacy and development professionals in Department of State/USAID and a special training school as an addition to the Global Fragility Act.