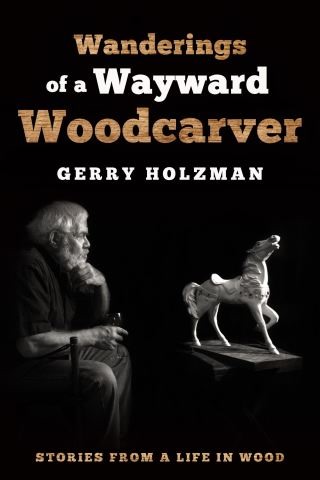 Wanderings of a Wayward Woodcarver

Stories from a Life in Wood

They say life is a merry-go-round—for Gerry Holzman, this has been literally and figuratively true. A master figure carver who has restored over 100 pieces of antique carousel art, created 250 pieces of original carousel carving, and was the head carver and executive director of New York's landmark Empire State Carousel Project, Holzman has devoted the past 50 years to woodcarving, and his skill has taken him around the world as a student, teacher, craftsman, and artist. Throughout this giddy merry-go-round of a career, he has encountered many intriguing ways to use our brief time on earth and invites us to accompany him as he strives to understand and appreciate them all.

From master carver Gino Masero, who taught Holzman much about carving, life, creativity, and decency, to Holzman’s students who touched his life deeply, to a sign carver who could not read, a witch who invited Holzman to visit her coven, and the mafioso who showed Holzman how to prevent his carvings from being stolen, Wanderings of a Wayward Woodcarver shows how a life in craft is the perfect viewpoint to see the whole of the human condition.

Gerry Holzman: Gerry Holzman has been a professional woodcarver since 1971, a carousel restorer since 1976, and a collector of New York State folklore since seventh grade. He learned his woodcarving trade by studying in England with the late Gino Masero, one of England’s 32 master carvers. During his career, Gerry has restored over 100 pieces of antique carousel art and has created approximately 250 pieces of original carousel carving. He was the head carver and executive director of the Empire State Carousel Project. This project, which features the work of over 1000 craftspeople throughout New York State, culminated in the creation of a full-size, operating merry-go-round—a truly unique machine that is entirely based on the theme of New York State’s history and culture. Aptly described as “a museum you can ride on,” the carousel is on permanent display at the Farmers’ Museum in Cooperstown, New York. He has taught at the Herschell Carousel Museum, the Adirondack Folk School, the Farmers’ Museum, and the 92nd Street Y. He has also been an artist-in-residence in Portland (ME) Public Schools, the Charleston (SC) Creative Arts School, and numerous Long Island public schools. He has written two books: Us Carvers, a memoir of sorts; and The Empire State Carousel, a lavishly illustrated guidebook to his extraordinary merry-go-round, and now lives in Brunswick, Maine.