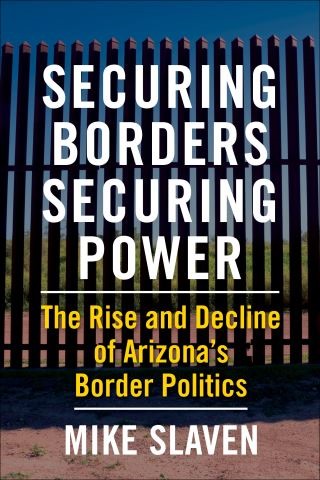 The Rise and Decline of Arizona's Border Politics

In 2010 Arizona enacted Senate Bill 1070, the notorious “show-me-your-papers” law. At the time, it was widely portrayed as a draconian outlier; today, it is clear that events in Arizona foreshadowed the rise of Donald Trump and underscored the worldwide trend toward the securitization of migration—treating immigrants as a security threat. Offering a comprehensive account of the SB 1070 era in Arizona and its fallout, this book provides new perspective on why policy makers adopt hard-line views on immigration and how this trend can be turned back.

Tracing how the issue of unauthorized migration consumed Arizona state politics from 2003 to 2010, Mike Slaven analyzes how previously extreme arguments can gain momentum among politicians across the political spectrum. He presents an insider account based on illuminating interviews with political actors as well as historical research, weaving a compelling narrative of power struggles and political battles. Slaven details how politicians strategize about border politics in the context of competitive partisan conflicts and how securitization spreads across parties and factions. He examines right-wing figures who pushed an increasingly extreme agenda; the lukewarm center-right, which faced escalating far-right pressure; and the nervous center-left, which feared losing the center to border-security appeals—and he explains why the escalation of securitization broke down, yielding new political configurations. A comprehensive chronicle of a key episode in recent American history, this book also draws out lessons that Arizona’s experience holds for immigration politics across the world.

Mike Slaven: Mike Slaven is senior lecturer in international politics at the University of Lincoln. He was previously a speechwriter for the U.S. secretary of homeland security and the governor of Arizona.