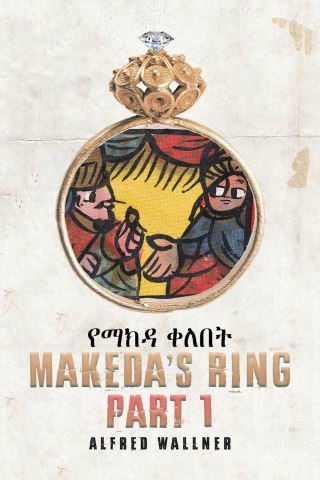 For Markus the choice was stark:
- Leave Austria, the homeland he both loved and hated.
- Flee from Lizzy, never more than a pale substitute for Laura, the love of his life, shattered to pieces by a bomb.
- Flee a country still overshadowed by the aftermath of Nazism.
- Make for Ethiopia, that land of all mysteries, magical and captivating, sombre and dangerous, luminous and healing. There, as he sets out to fulfil Laura’s dream of finding her uncle’s grave, Markus is forced to face his deepest fears and experience the highs and lows of every emotion, through the fascinating power of a single object.
A ring.
A simple ring, on the finger of an Ethiopian princess, which will lead him on his quest, bring him the answers.
And the words which already haunt his memories. Makeda, Makeda’s Ring.

Alfred Wallner: Born in Austria, Alfred Wallner grew up in Ethiopia where his father worked as a doctor. There he learned to speak, read and write in 7 languages and acquired a fascination for the history and the legends of that African country.
After studying Medicine for a year in Parma, he changed to Literature and became a teacher of Modern Languages in Ewell and Brighton. Moving to Ibiza, he started a small hotel and a building enterprise, and by extension he mastered the three-dimensional art of wood sculpting, holding many exhibitions in Switzerland.
Alfred’s experiences of Dessie, where he was allowed to accompany his father on medical visits, inspired him to finally become a writer. Remembering the tales of shiftas, men devouring hyenas and foul smelling sheitans are just some of the impressions brought to life in his novels. Rich stories of adventure and romance.
His first publication, a translation of his father’s, Three Months in a Gestapo Prison, was published in 2011. Alfred is currently working on his tenth novel.