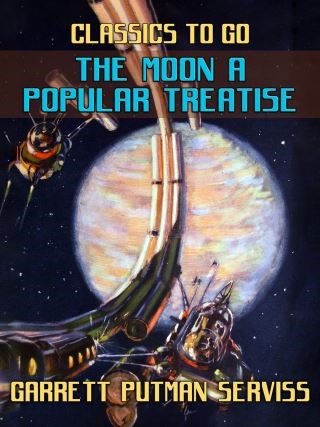 The Moon A Popular Treatise

Excerpt: "“The savant who originally demonstrated the earthly origin of the moon,” I replied, “is not one to be easily led into extravagance by his imagination. It is Prof. George Darwin, the son of the famous author of the ‘Origin of Species.’ I shall not mention his mathematics, which are troublesome, but allow me to tell you, in a word, that his investigations have satisfied astronomers that the earth and the moon once composed a single body. How many million years ago that was we can only guess. The causes of the separation which eventually occurred were the plastic condition of the original body while it was yet hot and molten, its swift axial rotation producing an immense centrifugal force at its equator, and the attraction of the sun raising huge tides which affected its entire mass instead of affecting only the waters of the ocean as the tides do at present. At last there came a time when an enormous portion of the swiftly rotating globe was torn loose. That portion included about one-eightieth of the entire mass of the earth. Some astronomers and geologists think that the ‘wound’ left in the side of the earth by this stupendous excision is yet traceable in the basin of the Pacific Ocean."

Garrett Putman Serviss: Garrett Putnam Serviss (March 24, 1851 – May 25, 1929) was an American astronomer, populariser of astronomy, and early science fiction writer. Serviss' favourite topic was astronomy, and of the fifteen books he wrote, eight are devoted to it. He unquestionably was more widely read by the public on that topic than anyone prior to his time.