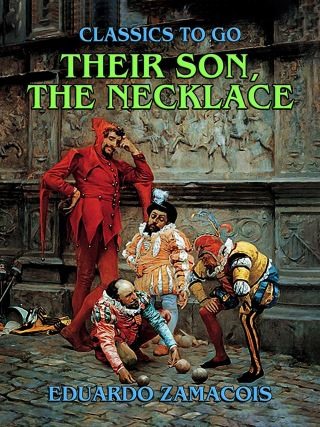 Their Son, The Necklace

Few writers of the tremendously virile and significant school of modern Spain summarize in their work so completely the tendencies of the resurgimiento as does Eduardo Zamacois. "Renaissance" is really the watchword of his life and literary output. This man is a human dynamo, a revitalizing force in Spanish life and letters, an artist who is more than a mere artist; he is a man with a message, a philosophy and a vision; and all these he knows how to clothe in a forceful, masterly and compelling style, which, though not always lucid, always commands. Zamacois sees life, and paints it as it is, sometimes with humor, often with pitiless, dissecting accuracy. (Goodreads)

Eduardo Zamacois: Eduardo Zamacois y Quintana (17 February 1873 – 31 December 1971) was a Cuban-Spanish novelist and journalist. A leading figure of the boom of short novel collections in Spain, and a representative of the bohemian literary scene in the country, he spent a substantial part of his life in Paris and, following the end of the Spanish Civil War, exiled in the Americas.