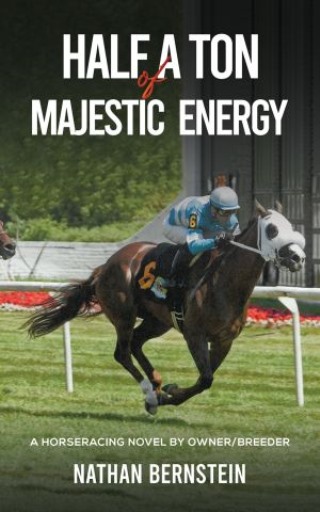 Half a Ton of Majestic Energy

Half a Ton of Majestic Energy is a fictional account of the everyday activity and breathtaking drama that occurs at the many thoroughbred racetracks. "Suspense." That is the one word that describes a day at the racetrack.

"Riders up!" The bugler's call to the post. The Post Parade featuring the aristocratic half-ton animals and their colorfully-garbed courageous jockeys.

"They're off!" Then the homestretch finale voiced by the excited track announcer; followed by ear-deafening suspense as the finish line is approached. Then the tote board results for the anxious betting public.

Nathan Bernstein and his wife, Rita, are resident natives of Chicago. The author holds a BSC in Marketing from Roosevelt University; his BA in Studio Art and MA in History were awarded by Northeastern Illinois University. A sports enthusiast, Nathan Bernstein was Art Director for five years for a major sports publisher. He also played utility infield in junior college and attended eight Randy Hundley baseball fantasy camps.

For the last twenty years Nathan Bernstein has been an owner and breeder of thoroughbred race horses. Venues are Hawthorne and Arlington race tracks, and the former Sportsman’s Park.

The author’s filly Ima Little Kitten is shown winning a Maiden Special Weight race at Arlington in 2016. Jockey Jose Valdivia, Jr. is aboard.