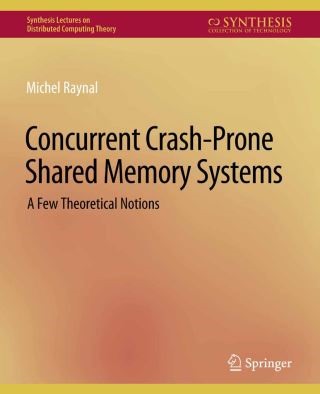 Theory is what remains true when technology is changing. So, it is important to know and master the basic concepts and the theoretical tools that underlie the design of the systems we are using today and the systems we will use tomorrow. This means that, given a computing model, we need to know what can be done and what cannot be done in that model. Considering systems built on top of an asynchronous read/write shared memory prone to process crashes, this monograph presents and develops the fundamental notions that are universal constructions, consensus numbers, distributed recursivity, power of the BG simulation, and what can be done when one has to cope with process anonymity and/or memory anonymity. Numerous distributed algorithms are presented, the aim of which is being to help the reader better understand the power and the subtleties of the notions that are presented. In addition, the reader can appreciate the simplicity and beauty of some of these algorithms.

Raynal Michel: Michel Raynal is an Emeritus Professor of Informatics, IRISA, University of Rennes, France. He is an established authority in the domain of concurrent and distributed algorithms and systems. Author of numerous papers on this topic,Michel Raynal is a senior member of Institut Universitaire de France, and a member of Academia Europaea. He was the recipient of the 2015 Innovation in Distributed Computing Award (also known as SIROCCO Prize), recipient of the 2018 IEEE Outstanding Technical Achievement in Distributed Computing Award, and recipient of an Outstanding Career Award from the French chapter of ACM Sigops. He is also Distinguished Chair Professor on Distributed Algorithms at the Polytechnic University (PolyU) of Hong Kong. Michel Raynal chaired the program committees of the major conferences on distributed computing. He was the recipient of several “Best Paper” awards of major conferences (including ICDCS 1999, 2000, and 2001, SSS 2009 and 2011, Europar 2010, DISC 2010, PODC 2014). He has also written 13 books on fault-tolerant concurrent and distributed systems, among which the following trilogy published by Springer: Concurrent Programming: Algorithms: Principles and Foundations (515 pages, 2013), Distributed Algorithms for Message-passing Systems (510 pages, 2013), and Fault-Tolerant Message-Passing Distributed Systems: An Algorithmic Approach (Springer, 459 pages, 2018).