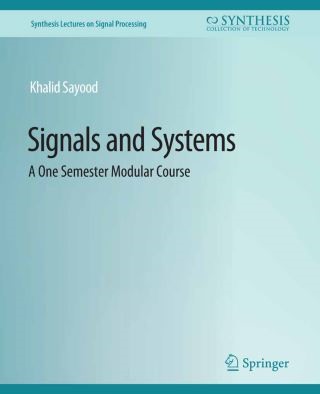 A One Semester Modular Course

This book is designed for use as a textbook for a one semester Signals and Systems class. It is sufficiently user friendly to be used for self study as well. It begins with a gentle introduction to the idea of abstraction by looking at numbers—the one highly abstract concept we use all the time. It then introduces some special functions that are useful for analyzing signals and systems. It then spends some time discussing some of the properties of systems; the goal being to introduce the idea of a linear time-invariant system which is the focus of the rest of the book. Fourier series, discrete and continuous time Fourier transforms are introduced as tools for the analysis of signals. The concepts of sampling and modulation which are very much a part of everyday life are discussed as applications of the these tools. Laplace transform and Z transform are then introduced as tools to analyze systems. The notions of stability of systems and feedback are analyzed using these tools.

The book is divided into thirty bite-sized modules. Each module also links up with a video lecture through a QR code in each module. The video lectures are approximately thirty minutes long. There are a set of self study questions at the end of each module along with answers to help the reader reinforce the concepts in the module.

Khalid Sayood: Khalid Sayood received the B.S. and M.S. degrees in electrical engineering from the University of Rochester, Rochester, NY, in 1977 and 1979, respectively, and the Ph.D. degree in electrical engineering from Texas A&M University, College Station, in 1982. From 1995 to 1996, he served as the Founding Head of the Computer Vision and Image Processing Group at the Turkish National Research Council Informatics Institute. From 1996 to 1997, he was a Visiting Professor with Bogazici University, Istanbul, Turkey. Since 1982, he has been with the University of Nebraska–Lincoln, where he is currently serving as a Professor in the Department of Electrical and Computer Engineering. He is the author of Introduction to Data Compression, 5th ed., Morgan Kaufmann, 2017, Understanding Circuits: Learning Problem Solving Using Circuit Analysis, Morgan & Claypool, 2005, Learning Programming Using MATLAB, Morgan & Claypool, 2006, Joint Source Channel Coding Using Arithmetic Codes, Morgan & Claypool, 2010, and Computational Genomic Signatures, Morgan & Claypool, 2011, and the Editor of Lossless Compression Handbook, Academic Press, 2002. His research interests include bioinformatics, data compression, and biological signal processing.